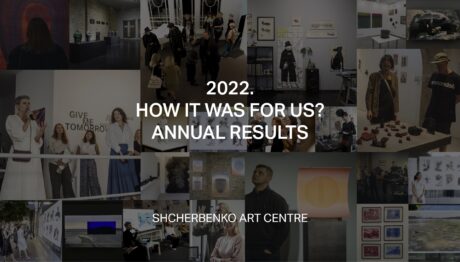 It’s time to evaluate the results of the extremely difficult 2022 for the Shcherbenko Art Centre.

“Life is subject to fluctuations – between past and future, being and death – it is consistently moving and manifesting itself in the natural rhythms of human existence and the world as a whole.” – this is a quote from the description of the project “Quiet Clock…” by artist Ruslan Tremba, with which we at #shchac started the 2022 exhibition year. The exhibition lasted until February 12. Even then, the tension was reaching its peak, but we decided not to stop work, and Oleksandra Tokareva’s personal exhibition “Merger” already opened on February 16. The existential search of the artist continued the line of discussion started by Tremba about the impermanence of existence and the passage of time. Forebodings of the inevitable, anxiety, and fear of the challenges that awaited us in the future, were replaced by the awareness of the immeasurable inner power of resistance, which had already confidently filled our hearts.

From February 24, the exhibition was mothballed, and the team of the Shcherbenko Art Centre scattered around the world. All of us needed time to calm down and build new plans for the future, choose a vector of development, and set goals that would continue to follow our mission. We started this year inspired to implement ambitious project plans, but reality dictated its conditions. Looking back on the first months after the start of the full-scale invasion, we are amazed with ourselves, because almost immediately we began to work, looking for opportunities to be heard, and receiving the support of our colleagues and friends abroad. In this article, we will briefly tell you about the main implemented projects.

Already in May, in cooperation with the Czech Centre in Sofia, the Window Gallery project was opened on the initiative of the director of the center Dagmar Ostřanská. This year, we have implemented two exhibitions: “Where to Go? Where to Go” by Zoia Laktionova, one of the finalists of the MUHi 2021, and “Lviv Diary” by Vlada Ralko, which continues to this day. Projects in the Window Gallery give us effective opportunities to communicate with Bulgarians, which is important to us, so in early 2023 we will open new projects there, telling the truth about the war.

One of the priority areas of work of the Shcherbenko Art Centre during the full-scale war of Russia against Ukraine is the dissemination of information about the war throughout the world. After all, contemporary Ukrainian art plays one of the most significant roles today. Through our fixations of personal experience, through our reflections, especially in art, the formation and awareness of the basic human values take place, which is precise what shape a conscious civil society. So, on the Independence Day of Ukraine, August 24, we opened the “Give Me Tomorrow” exhibition in Lisbon in the concept store “Conceptica. Lisbon”. The project included the works of 18 young Ukrainian artists: Tereza Barabash, Artem Volokitin, Vasylyna Vrublevska, Oleg Dimov, Dmytro Yevsieiev, etchingroom1, Alevtina Kakhidze, Maria Kulikovska, Zoia Laktionova, Zhenya Laptiy, Tetiana Malinovska, Alyona Naumenko, Mariia Proshkovska, Vlada Ralko, Volodymyr Say, Stanislav Turina, Maryna Talutto, Yarema Malashchuk and Roman Khimei. All these works were created after the full-scale invasion, all of them are imbued with pain and sadness for home, and present a new stage in the life of every Ukrainian.

“No great art, after all, has ever stopped or prevented another war. Even the most powerful pacifist works did not force humanity to abandon mass atrocities and genocides. Neither Goya’s The Disasters of War nor Picasso’s Guernica prevented either new wars of aggression or new bombings of civilians. Nonetheless, these works are significant and valuable – first of all, because of the great idea that they illustrate incredibly accurately. These works remain the pillars on which the common understanding of what is and should be unacceptable and intolerable is held. What is, and will always be an absolute evil. Seeing this, we purge ourselves of compassion and fear in order to remain part of civilization, civil society, and people with the dignity and value of our own lives in our minds and hearts. We obtain the right for tomorrow.” – said cultural studies researcher Yevheniia Butsykina in the description of the “Give Me Tomorrow” project in Lisbon. We would not have been able to implement this project without the help and support of Ukrainians who have been forced to dislocate in Portugal, we are especially grateful to Elena Petrescu, Antonina Patramanska, and Serhii Vovk.

In parallel with this, the team of the art center began to return to their native city—Kyiv, and searched for a possible format for the gallery’s work during martial law. We asked ourself many questions: What can be the presentation of art during wartime? Is it appropriate to show the horrors of war that we see from our windows? etc. The answer came during a meeting with Kristina Yarosh and Anna Khodkova. It turned out that the artists were looking for a new studio at that time because they had to leave the last one due to the war. The idea of a participatory project arose, in which visitors will be involved in the process of creating art from many sides. For two months, the Shcherbenko Art Centre turned into a temporary studio of the etchingroom1, where visitors had the opportunity to visit the artist’s workshop and get their own unique experience of contact with art. As part of this project, we organized two events: a pop-up sale with a sale of works and drink&print, where visitors had the opportunity to print linocuts on paper or clothes and create their own images for printing.

In May of this year, we were pleased to receive an invitation to participate in the Vilnius Art Fair 2022 from the project team: director Diana Stomienė, coordinator Gabija Tarabilda, and manager Joana Trimonienė. In Lithuania, we presented the “The Promise of Freedom” project, for which the works of Ukrainian abstractionists artists of different generations and different media were selected: Vasyl Bazhay, Oleg Dimov, Pavlo Kovach (senior), Mykola Kryvenko, Anton Sayenko, Tiberii Szilvashi, Marina Talutto, Myroslav Vaida, Vasylyna Vrublevska. After all, the constancy and completeness of abstract art is a strong root that keeps us confident, in independence from time and circumstances, since the most influential step in the history of art, was made by Kazimir Malevich. More than 20,000 people visited the fair, and the organizers added works by Myroslav Vaida to the Vilnius Art Fair collection.

The next step was the opening of the second episode of the “Give Me Tomorrow” project. This time on another continent, in the John and Maggie Mitchell Art Gallery, located at MacEwan University in Edmonton, Canada. The project included the video works of artists: Piotr Armianovski, Lia Dostlieva and Andrii Dostliev, Zoia Laktionova, Yarema Malashchuk and Roman Khimei, Mariia Proshkovska, Maria Stoianova and continues until January 14, 2023. For a more comprehensive understanding of the project, an online meeting was held with the curator of the project Maryna Shcherbenko and artists in the format of an Artist Talk, organized by the director and curator of the gallery Carolyn Jervis, and Larisa Hayduk, director of the Ukrainian Resource and Development Centre of MacEwan University.

Of course, the war greatly influenced the exhibition program and the goals of the art center. However, work with the MUHi (Young Ukrainian Artists and…) project remained a priority.O n November 8, the opening of the “In Progress” exhibition took place in the Ukrainian Cultural Center at the Embassy of Ukraine in France, which presented the works of three prize winners of the 2021 competition: Pavla Nikitina, Maria Stoianova, and Olha Kuzyura. Pavla Nikitina presented the “Fear” series of three sculptures, where she explored almost the most vulnerable and at the same time multifaceted human emotional state. Olha Kuzyura presented the project “Relative Security”, which shows the transformation of the concept of security during the war, which brought a sharp awareness of the fragility of our bodies and usual ways of life. And the project “Forest, Forest” by Maria Stoianova, allows the international audience to better understand the phenomenon of the “indomitable Ukrainian people”. The project was implemented at the invitation of Olha Sagaidak and Solomiya Savchuk as part of the “Ukrainian Spring” project, initiated by the Ukrainian Institute and supported by the DoFa Fund.

Indeed, it was a difficult year. Due to Russia’s armed attack on Ukraine, we are all now under threat of destruction. The world is on the brink. One state provokes crises all over the world with its aggression. In the 21st century, the Russian president and the majority of Russians violate the main human values acceptable in the civilized world. Russians deliberately kill Ukrainians. Russians violate the borders of other countries. Why is this happening? How could all these horrors be allowed in the modern world? At a time when it would seem, humanity has already recognized war as the greatest possible degradation. Where to find shelter? The darkness of Russia is rushing across the world at an unstoppable speed, seeping poison into the landscape surfaces of the planet, erasing entire cities from it. Our Ukrainian cities are our lives.

We cannot stop or leave our cause, we must continue to fight and art is our weapon!