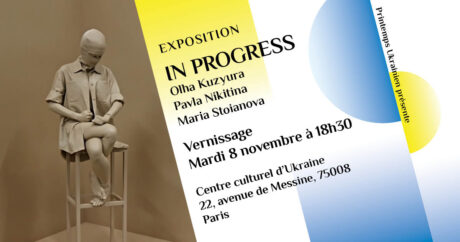 Shcherbenko Art Centre (Kyiv, Ukraine) presents the exhibition In Progress: MUHI-2021 prize winners in the space of the Cultural and Information Center at the Embassy of Ukraine in France.

The MUHі Award is one of the most prestigious in Ukraine today, created in 2009 by gallerist and curator Maryna Shcherbenko. The purpose of the award is to work on qualitative changes in the Ukrainian art field, as well as help young artists in building their careers, including at the international level. Therefore, every two years, the MUHI Award team presents a full-fledged section of young Ukrainian art, and the laureates are chosen by an international jury.

Project In Progress: The winners of the MUHI-2021 award will introduce to the French audience the works of three MUHI-2021 award winners: Pavla Nikitina, Olha Kuzyura, and Maria Stoianova. All of them are strong female voices, all three are in the phase of active career development, and all are internationally integrated artists with powerful visual language and active practice. Pavla, Olha, and Maria belong to a new generation of Ukrainian artists, whose representatives are distinguished by an active civic position and focus on socio-political issues. They do not just reflect on the events in their country, they are witnesses and active participants in these events. Artists work in different media, but they are united by research optics. All three in their practices touch the most sensitive area – emotional states caused by trauma.

Pavla Nikitina works with new technologies, exploring psychological and social phenomena through sculpture, and she was also the winner of the MUHi-2021 Grand Prix. Pavla has a brilliant command of classical and modern techniques of working with sculpture – from academic to 3D modeling. The laureate of the first special prize of the MUHi-2021, Olha Kuzyura works on the intersection of graphics, installation, and text, exploring the phenomenon of collective and individual memory, including through gaps in her personal history. Maria Stoianova, laureate of the second special prize of the MUHi-2021 – documentary director; also she has an education in cultural studies and social anthropology, Maria focuses on social issues. Among other things, she examines the process of formation of the newest Ukrainian identity, focusing on the resistance to shocks and the capacity for civil resistance of the powerful Ukrainians.

The large-scale war launched by Russia against Ukraine on February 24 of this year is the main topic on which Ukrainian artists are focused. The exhibition In Progress is an attempt at a collective reflection on this war and the variety of personal and social transformations caused by it. The works of the exhibition are a part of the projects previously developed by involved artists, but after eight months of the great war in Ukraine, they have acquired a new sound (sense). The project is not only among the most interesting examples of young Ukrainian art but also an opportunity for the international audience to deepen their knowledge and understanding of Ukraine as a point on the map where the future of the whole of Europe is currently being determined.

In Progress is art being created right now and seeks to talk to the world about the transformation that Ukraine is undergoing, as well as the true meaning of this war for Europe.

The works of three female artists, like the panes of a children’s kaleidoscope, are composed of metaphrases and form a background for talking about difficult, but important experiences. This picture is unique not only because it exists here and now, changing every moment, but also because of its openness. Its authors are direct carriers of the experiences of the war, which has already changed the world as we know it now, no doubt.

The exhibition In Progress: MUHI-2021 Prize Winners will run from November 8th till 28th, 2022. The opening will be at 6:30 p.m. It is carried out as part of the second season of the “Ukrainian Spring” project initiated by the Ukrainian Institute. Adress: 22, avenue de Messine 75008 Paris, France.