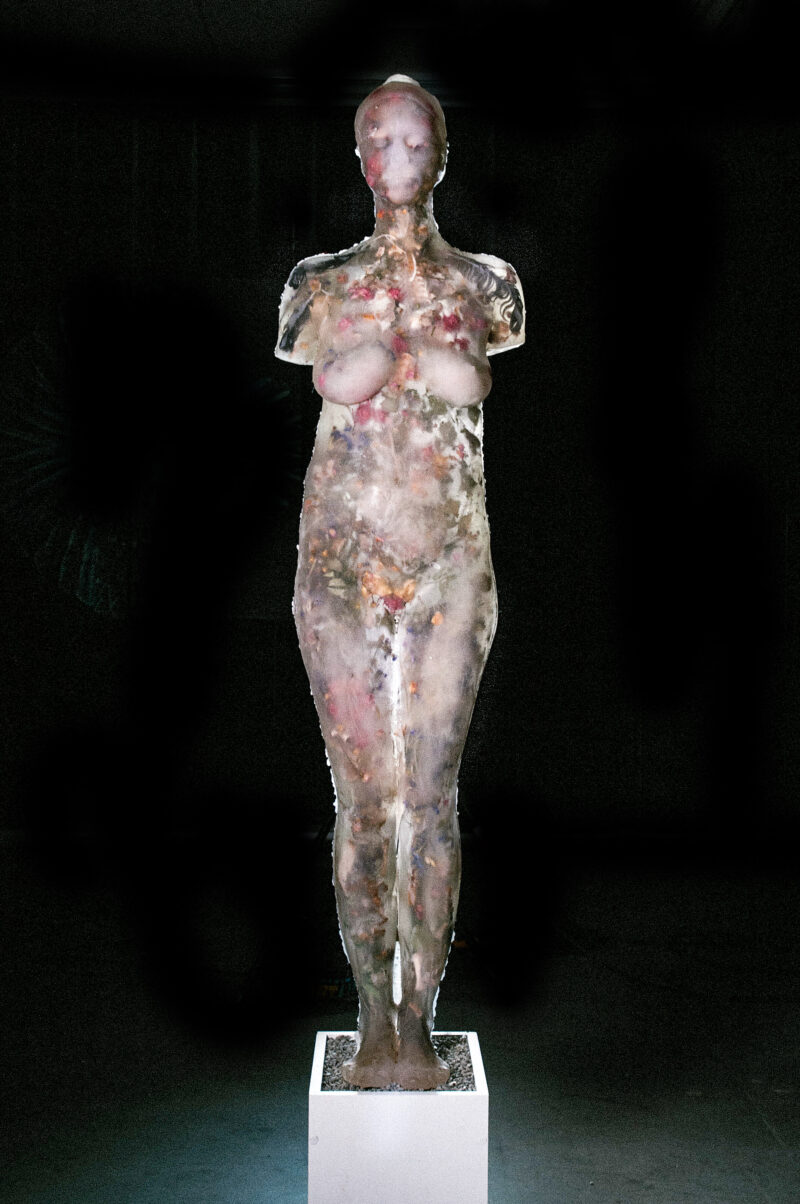 All artists ALL WORKS OF THE ARTIST

Born in 1988 in the city of Kerch, Ukraine. Graduated from the National Academy of Fine Arts and Architecture, Kyiv, Ukraine. From 2016 to 2017 she studied at the Royal Institute of Fine Arts, Stockholm, Sweden. Participant of the project MUHi 2011. Nominated for Pinchuk Art Prize 2013. Author of architectural projects (in particular, Shcherbenko Art Center building) in Ukraine, Switzerland and China. She conducted lectures and workshops on contemporary art in Kyiv (VCRC, Bottega gallery, PinchukArtCentre), Donetsk (IZOLYATSIA), Dnipro, Liverpool and Malmö.

‘Constitution of the Autonomous Republic of Xena-Maria’ (series of the watercolours on the papers, received from migration offices) at the group exhibition ‘Futureless’ in SomoS Art Center, Berlin, Germany.

‘Constitution of the Autonomous Republic…’ (continuation of the series of watercolours on the papers, received from migration offices) at the group exhibition ‘From Ritual to Routine’ in Artsvit gallery, Dnipro, Ukraine.

Premiere of the full-length feature film ‘The Forgotten’ (directed by Daria Gold-Onyshchenko) at the Molodist Film Festival in Kyiv, Ukraine. In this film the documentation of the live performance by Maria Kulikovska was used, in which artist personally shot a series of her sculptures – casts from her body made of ballistic soap. And also in the continuation of this performance Maria played her first role in a full-length film as a journalist of propaganda TV-channel.

‘The President of Crimea’ – sculptural installation with the series of watercolours drawings on the papers, received from migration offices at the MFA final exhibition in MinT Art Center, Stockholm, Sweden.

‘The President of Crimea’ – sculptural installation of 2 cast-iron bells, body parts from cast-iron and the series of watercolours drawings on the papers, received from migration offices at the MFA solo exhibition in Vita Havet – main hall of Konstfack University, Stockholm, Sweden.

‘Flowers’ – solo exhibition together with Swedish artist Alexandra Larsson Jacobson in Shcherbenko Art Center, Kyiv, Ukraine. Exhibition curated by School of Political Performance, where were presented a new series of 5 soap busts ‘880’ and 88 watercolours from the series ‘888’, as well video-performance ‘Let me say: it’s not forgotten’.

‘Self-portrait in Flowers’ – bust from ballistic soap with flowers inside. Created with Uleg Vіnnіchenko. In the collection of Vsi. Svoi Store (the biggest fashion concept-store of Ukrainian design), Kyiv, Ukraine.

‘Soap Figure with Flowers’ – cast from the artist's body in ballistic soap, which used for the testing weapons. The sculpture was created with Uleg Vіnnіchenko specially for the solo exhibition ‘My Skin is My Business’ at Odesa Fine Arts Museum. This sculpture is part of permanent collection of the Odesa Fine Arts Museum, Odesa, Ukraine.

‘My Skin is My Business’ – solo exhibition with the number of sculptural series in the grotto of The Odesa Fine Arts Museum, Odesa, Ukraine. The whole exhibition and the sculptures where created with Uleg Vіnnіchenko.

‘Let me Say: It's not Forgotten’ – video-performance of execution of 6 Soap Figures, recreation of the real story, which happened 9th of June 2014 during occupation forces in the East part of Ukraine, where pro-Russian terrorists used for the shooting practice all soap sculptures from the triptych ‘Homo Bulla – Human as Soap Bubble’ (2012) and all plaster figures from ‘Army of Clones’ (2010) in Izolyatsia Art Center.

‘Based on the Truth Stories. 2’ – performance and presentation of the White Soap Figure form the sculptural triptych ‘Homo Bulla. Replica’ (2015) in the historical museum ‘Hyndlian-House’ at the group show of Art Collection Deutsche Telekom, organised by ‘Office for Art’ and ‘Cultural Capital’ in Plovdiv, Bulgaria.

Installation ‘The Raft CrimeA’ at Artivist_lab in Prague, Czech Republic. Exhibition was organised by human-rights organisation ‘People in Need’. The show was created with Uleg Vіnnіchenko.

‘Based on the Truth Stories. 1’ – performance and sculptural installation at the group show in Konsthall-C, Stockholm, Sweden. The sculptures and preparations for the performance created with Uleg Vіnnіchenko.

‘Stardust’ – metaphorical maquette (125 sq. m) of the Kerch Peninsula with 5 Figures from the soil and different minerals at the historical exhibition ‘Amazing Stories of Crimea’ in Mystetskiy Arsenal Art Museum in Kyiv, Ukraine. The sculptures, model of landscape and video created with Uleg Vіnnіchenko. Performative sculpture ‘Stardust’ became a part of the permanent national collection of the Mystetskiy Arsenal Art Museum.

Execution of 6 Soap Figures – life performance of the shooting soap sculptures for the Ukrainian-Swiss film ‘The Forgotten’, Kyiv, Ukraine. The sculptures created with Uleg Vіnnіchenko.

‘Green Figure’ – cast of the artist body from the epoxy resin at the Q Contemporary Collection, Budapest, Hungary.

2010
"Army of Clones" (site-specific sculptural installation of 20 objects, casts of the own body of artist) personal project within the international festival of contemporary visual art GogolFest’10, Studio Dovzhenko, Kyiv, Ukraine
Finalist of the contest "Mukhi 2010" initiated by Bottega-gallery and the Institute of Contemporary Art, Kyiv, Ukraine