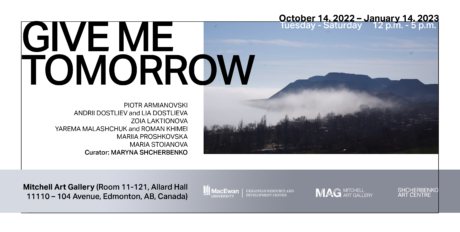 “GIVE ME TOMORROW“ IN EDMONTON, CANADA

This is the second exhibition of the Shcherbenko Art Centre with the announced title – the second exhibition where works are gathered that react to Russia’s crimes in Ukraine. The first occurred in 2014, following Russia’s invasion of eastern Ukraine and annexation of Crimea. Back then, the curator of the project, Maryna Shcherbenko, wrote: “Young artists subtly feel the pulsation of social life, because they are aware of their purpose to change, awaken, and create. And today we present their works, which depict our emotions, thoughts, and impulses that we sometimes have difficulties facing.”

Today, this project has been revived, as Russia’s full-scale war against Ukraine is being unfolded, because modern Ukrainian art is timely, and it plays an important role in these dark times. What exactly is its role? Perhaps the cathartic formula of tragedy from Aristotle becomes relevant: tragedy should lead to the purification of the audience’s feelings of compassion and fear. Catharsis allowed the citizens of Athens to return to real life at the end of the action and live it stronger and firmer.

From ancient times and up to this day, no great art has ever stopped or prevented another war. Even the most powerful pacifist works did not force humanity to abandon mass atrocities and genocides. Neither Goya’s The Disasters of War nor Picasso’s Guernica prevented new wars of aggression or bombings of civilians. Nonetheless, these works are significant and valuable – first of all, because of the great idea that they illustrate incredibly accurately. These works remain the pillars on which the common understanding of what is and should be unacceptable and intolerable is held. What is, and will always be an absolute evil. Seeing this, we purify ourselves of compassion and fear in order to remain part of civilization, civil society, and people with the dignity and value of our own lives in our minds and hearts.

Ukrainian artists are gathering strength and doing their work, transforming trauma into creativity, or seeking salvation, medicine, a reason, and a goal to move forward in their creative endeavors. Some of them now believe that their art is helpless next to shelling and explosions. But it cannot be otherwise, because now it is more important than ever to do what you can, to do it sincerely and openly. They experience war, become its victims, escape from it, and work as volunteers, or witness traumatic events. And, unlike the photographs of reporters, their work is not frightening, on the contrary – giving us the right for tomorrow. At the same time, you can see artworks created by Ukrainian artists at the exhibition before the start of the full-scale war, but already when the war in the East of Ukraine was raging and still has been ongoing since 2014.

Created by Ukrainian curator Maryna Shcherbenko. The aim of the centre is to create opportunities for dialogue between the art world and a broad audience. Shcherbenko Art Centre arranges the exhibitions and works as a venue for lectures, panel discussions, workshops with leading masters of contemporary art in Ukraine and other countries.

Is a public gallery committed to presenting art exhibitions, programs, and publications that feature diverse artistic and curatorial perspectives committed to critical discourses in contemporary art. The gallery supports interdisciplinary, experiential learning for the public and for the university community. Located in the heart of downtown Edmonton in MacEwan University’s new Allard Hall.