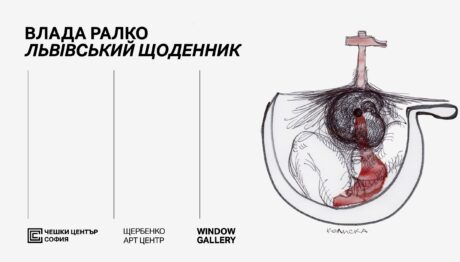 From the beginning of Russia’s full-scale invasion of Ukraine,  the Czech Centre Sofia has expressed support for the cultural community and all the people of Ukraine. On May 12, the banner with words of support for the Ukrainian people was ripped down by vandals from the Centre’s window, which was the catalyst for the idea of opening a new ‘Window Gallery’. The Czech Centre’s team invited Kyiv’s Shcherbenko Art Centre to collaborate on a new project called ‘Window Gallery’. We will place the posters on Centre’s windows, made together by contemporary Ukrainian artists, and the exhibitions will be changed every two weeks.

Vlada Ralko
Born in 1969 in Kyiv. In 1987, she graduated from the T. G. Shevchenko Republican Art School, in 1994 – the National Academy of Fine Arts and Architecture (workshop of Prof. V. Shatalin). Works with painting, graphics, sculpture, installation. Member of the National Union of Artists of Ukraine since 1994. In 2017, she was recognized as one of the hundred most influential cultural figures in Ukraine, according to HB. Author of research texts, poetry, essays and critical articles about art and its connection with philosophy and politics. Lives and works in Kyiv.