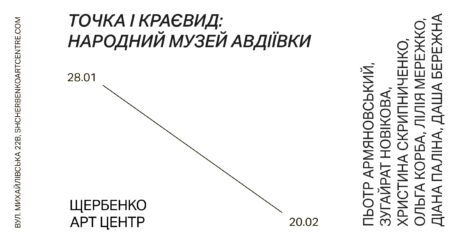 “Point and Landscape. People’s Museum of Avdiivka” is an exhibition project by artist and director Piotr Armianovski in collaboration with artists of the People’s Museum including Khrystyna Skrypnychenko, Olga Korba, Liliia Merezhko, Zugairat Novikova, Dasha Berezhna, and Diana Palina. The project presents the works of the museum participants, video interviews with them, and the video “People’s Museum of Avdiivka” by Armianovski, which was previously exhibited and won a prize in the competition MUHi 2019. The project will also feature video interviews with Tetiana Pereverzieva, who is one of the organizers of the Avdiivka FM festival, and Alan Meyer, a German artist who has visited Avdiivka many times to make workshops and plein airs.

New works presented as a group artistic statement are both an independent project and a continuation of the previously presented narrative line about acquaintance with the front-line museum in the video “People’s Museum of Avdiivka”. The personified image of the museum from Armianovski’s video then shared its long history about trips to the Caucasus and the military bombardment during the current conflict by itself. Now the museum’s appearance is present in the images of its participants.

The artist’s long-term work with the museum began with a visit to the Avdiivka FM festival, which took place at the People’s Museum and other locations. Then his intention to take part in the theatre transformed into a desire to capture the active life of the cultural center in the video. In the new project, Piotr Armianovski is not only an artist who is making a video narrative but also a mediator. He is a mediator between the local museum in Avdiivka and its visibility in an interregional art scene; between artists there and visitors here.

The name of the exhibition by itself – “Point and Landscape” – collects a combination of meeting points on the way to the last one that is the People’s Museum. As Piotr comments, “A point is a component of artwork. Also, it is a site, a place needed by an artist and a spectator to see the landscape, to meet each other, to turn the world upside down.” Same time as such a meeting point on the cultural landscape map is the People’s Museum, Avdiivka is a border site on the map of the conflict. It is a border site that is converted into a living place by the initiative of local activists.

Piotr Armianovski
Piotr Armianovski is a performer and director, cofounder of Pic Pic group. Studied theatre and performance art in Kyiv, Lviv, and Moscow including “School of Performance” by Janusz Bałdyga, “The Artist Is Present” by Marina Abramović. Since the war conflict started in his home city Piotr focuses on the documentary. Piotr Armianovski participates in projects and exhibitions in Ukraine, Poland, Hungary, France, and Spain.