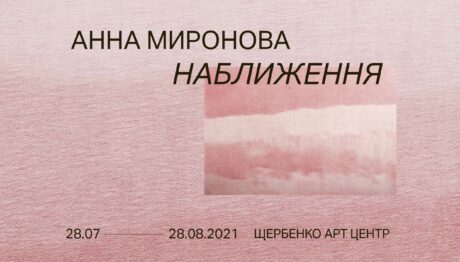 Despite the non figurative nature, Anna Mironova’s works are not truly abstract. Behind each of them is a certain object. In the new series of drawings it is a misty space at dawn, a space of morning silence, of memories and knowledge conveyed in some more or less dense strokes of a pink pencil. This intentional variability of strokes’ density allows approaching. Moving away and then coming closely, approaching becomes an action, state, acquaintance with the body in all its fullness. It is the human body and the body of nature depicted on paper and transformed during the viewer’s immersion:

“Pink is a body. The body is conveyed most truthfully in the drawing not as a superficial statement of fact. Here it reveals its essence of breathing. With a gradual approach, the inevitable gaps between the strokes become more and more apparent. It seems that this movement can be continued deep into the plane of the sheet, through the lace of strokes, through the pores of the body, destroying the feeling of solid materiality. Everything is space, the space is air and objects. We are the space”, Anna Mironova.

The artists’ feelings are always conveyed in abstraction and getting revealed due to interaction with the recipient:

“Anna Mironova’s sensual drawings convey the inner spiritual state transferred in lines that pulsate on the surface of the paper. Horizons filled with light strokes seem to draw inside and leave the viewer alone with strong emotions. It is an emotional component that is repeated from series to series by the artist regardless of the chosen theme, form, color or medium”, curator Maryna Shcherbenko.

The artist has been creating pink pencil drawings for three years, and now they will be shown as a result of work in a place not marked by clear geographical coordinates. It is each time new, but each time surrounded by nature. The project will also feature some monochrome black and white works from several past series, personally selected by the author to build a dialogue with new drawings.

The project also contains the sculptures and objects that build an opposition of being created and seen by the artist. The sculpture visually reproduces the process of life creation, and the tree object reflects its completion and destruction. These antonymous actions together form the integrity, the circular flow of life, which in the process of gradual approach is revealed again and again.

Since 2007 Anna has been a member of the Union of Designers of Ukraine, and since 2008 of the National Union of Artists of Ukraine. She has participated in numerous exhibitions in Ukraine and abroad. Lecturer at the Borys Grinchenko Kyiv University. In 2015, she became a laureate of the All-Ukrainian Triennial of Graphics, in 2018 is a laureate of the award named after Oleksandr Danchenko. In 2020, Anna got the second prize in the X All-Ukrainian competition named after Heorhiy Yakutovych. The works are in the collection of National Art Museum of Ukraine, Kyiv History Museum, Odessa Fine Arts Museum, Museum of Contemporary Ukrainian Art of Korsakiv, National Center “Ukrainian House”, and other public and private collections in Ukraine and abroad.