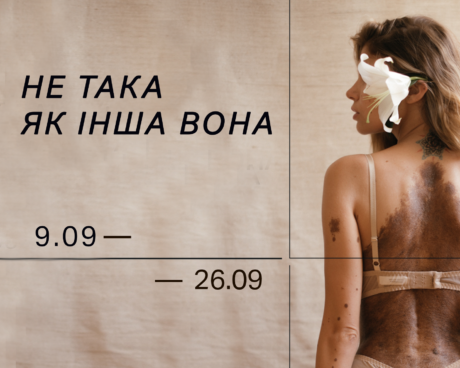 Not Like Other She is a social project about the beauty of non-standard appearance. The space for the first exhibiting of this project is provided by Shcherbenko Art Centre. The author of the project is a photographer Diana Andrunyk who has been shooting women with special physical features for several years.

The main goal of the project is to attract community attention to women whose bodies have their own particularities. After all, about 15% of the world’s population has various forms of disability and there are about 3 million of such people in Ukraine. The project involved women who feel confident and sexual despite all the physical features. For example, Paralympic wheelchair champion Uliana Pcholkina, supermodel Yuliana Yusuf with a nevus who developed an app for people with skin problems, or Varvara Akulova, a make-up artist of the project who had more than 25 surgeries on her face.

As Diana Andrunyk comments, “One photo can change thousands of lives. One photo project can change a story. I believe that the project Not Like Other She is not just a desire to break the standards of beauty. This is a project where everyone will find something for themselves. Maybe it will be self-esteem, maybe it will be the realization that he or she was wrong, maybe it will be easier for someone to breathe and live”.

The exhibition is dedicated to the deceased Daria Himchuk who is the heroine of the second project.

The project continues in time and Diana has already shot two parts. The first of them was created during 2018 and 2019, and the second one was made in late 2019 and early 2020 together with the media Bird In Flight. Currently, she is shooting the third part of the project. At the Shcherbenko Art Centre, Diana presents photos of two new heroines along with portraits of previous participants. The project will be shown in the exhibition space for the first time because before that it existed only online. In the future, Diana is planning to show works in other exhibition spaces in various cities of Ukraine.

This is a charity exhibition because the purpose of it is also to raise funds for the treatment of one of the heroines. Partners are project “I can”, YARO, EatEasy, Star Light, Shcherbenko Art Centre.

She has been working as a photographer for almost 8 years. She was a photojournalist for The Village Ukraine and collaborated with many glossy magazines, including Pink, Harper’s Bazaar, Cosmopolitan. Diana has also worked in Abu Dhabi, Bangkok, Berlin, and Copenhagen. She returned to Ukraine to work on social projects with orphans and people who have disabilities.

Entrance is allowed up to 10 people simultaneously. We encourage you to use masks.
Shcherbenko Art Centre,
Mykhailivska Street, Kyiv, Ukraine.