Volodymyr Sai: “Old age is a significant part of our existence. It is worthy of incarnation in sculpture” Surname Sai at the majority of domestic art lovers was recently associated only with the figure of Alexei Sai, a successful artist “in the prime of life”, who works in the original Excel Art technique. However, with the appearance on the art scene Alexei’s younger brother, Volodymyr Sai, it became clear – we are dealing with a real artistic clan, and each of its’ representatives is distinguished by a special creative vision. As it often happens, two brothers, Alexei and Volodymyr, are very different in psychological characteristics: if the older Alexei, rather, a cheerful extrovert, then the behavior of the younger is clearly dominated by introversion. Shy and immersion into himself, he demonstrates considerable potential and causes a great interest. Vladimir Sai works at the junction of genres – using a photo, he depicts on a hypertrophic scale the manually created objects or ordinary-looking attributes of everyday life. Today, Volodymyr Sai quite justifiably can be called one of the most interesting young participants of the domestic art-process. The artist recently exhibited in the framework of major projects and is in an active creative search, but already now he is pleased with the originality of the approach and the absolutely unique energy of the works. –         Vladimir, you create objects on the border of beautiful and ugly – variations on the theme of old age, old body, flabby, dead flesh. Why are you so interested in these questions?

–         It is definitely not a dead flesh. But why do my “heroes” get old? I think, actually, the material prompts. I do not want to portray the old man, it’s just a man – but he turns out just like that. Probably, because it is more expressive, more impressive, and the artist goal is to create something spectacular.

–         Modern culture is built on the triumph of youth, the vital force, and old age and all the accompanying things are very rigidly superseded from the mass consciousness. This is despite the fact that the old body is more textured, more interesting in the sense of picturesque. Not without reason models for artistic exercises are taken not by the young, but by the elderly – precisely in order to make it more interesting to manifest the body …

–         Old people amaze me, they are interesting to watch (young people also, of course). In fact, old age is not a short period, perhaps two thirds of life – it is aging, a kind of decay of the body. A hundred years ago a forty-year-old man was considered old, a grandfather. Old age is a significant part of our existence. It is worthy of embodiment in sculpture.

–         I think this is the continuation of my academically realistic training. This is the search for a new realism that based on absolutely realistic materials. Human is covered with skin, so and I make a “skin” sculptures.

–         Yes. First I graduated from Kiev Art and Industrial College, and then National Academy of Arts and Architecture, the Department of Graphics.

–         So why did you, with your articulated interest in corporeality, choose graphics? After all, it’s absolutely not a fleshly technique – it’s, on the contrary, dry …

–         I tried to enter the faculty of painting for a year – did not work out and decided to try myself in graphic arts. And it turned out, that graphics are good because it makes you think, invent something. It is far from pictorial drawing, it is quite difficult to depict something graphically. Painting allows you to achieve some result with main colors in a few minutes, but how to achieve this by graphics – here it is necessary to speculate. –         And how long ago have you started to create objects, work in a direction so different from the specialty you got at the academic bench?

–         I think, even when I was studying. In composition classes, you need to do something interesting, but everything I painted with watercolor was pretty boring. Once I got a piece of playdough, then I mashed it up a bit, cut it, scraped and photographed it – for me it turned out very interesting. I photographed all this, showed the teacher, and the business moved along – translate photos into graphics and engraving. And it all started – work from polyethylene, oil, leather… All my creativity – one infinite series, it flows from one work to another.

–         So you are interested in working at the junction of the technique?

–         Yes, in my works there is a mix of all kinds of techniques, everything is tight implicated in photography, in sculpture, but also there are painting and graphics. It turns out such an incomprehensible product.

–         Material plays an important role in your works – for example, I was struck by the work of chicken skin. How did you discover this material?

–         Yes, in fact, it’s just a variation on plasticine theme. First there was polyethylene with its shine effect. Here is shapeless modeling clay, the light can’t catch him at all – it’s not interesting, it’s a semi-finished product. But when you stretch polyethylene on it, it becomes alive, like a skin. But when you cover with polyethylene, it becomes alive, like a skin. Then was followed by skin. And what kind of skin? Of course, the easiest way is to use the real one. And where to get a real living tissue? Available skin – is a chicken and turkey.

–         I do them very quickly, for 15-20 minutes. We have a skeleton, then the skin is quickly covered it – and place in the refrigerator. And then I take pictures. Photo shoots are endless – one background, another, with different lights and so on… More time, by the way, takes photographing, rather than production.

–         Do you consider your work beautiful? Do you strive to this category in art at all?

–         Now it has become fashionable to invest in work some philosophical or social sense, in addition to directly motor pleasure from the very creation.

–         I have no such task. My source of creativity is simply a search for beauty, plastic expression. And philosophy is something like… not for an artist. Well, maybe for an artist, but for another. However, if desired, philosophy can be summed up for everything – you just need to think about it. –         I do. But basically I solve other problems now. Philosophy is still for large-scale projects.

–         Somehow you get away with it. Creation of an object is a process of solving problems, including material and financial.

–         No, I can’t feed myself yet. I always engaged in additional matters: drew storyboards for commercials, did all sorts of artistic hacks…

–         Well, back to the creativity – to your series of another plan, dedicated to a strange aesthetics on the verge of abstraction and everyday life, when you make a big thing out of a small thing, when a clip, with the help of photography enlarged to a format of one and a half by one and a half, acquire an entirely new unexpected meaning, becomes abstract object? Is this your proprietary method?

–         This is just a sketch method – you are doing something small, then you increase it, and then the picture is written. So, it’s easier to do something small, in this little one to concentrate some thought, and then to increase everything. For example, using a camera – it is the same tool of a modern artist as a brush or pencil. 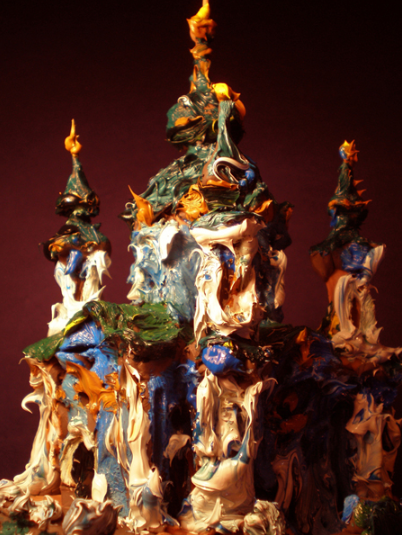 –         Do you focus on someone when you create your work? Consider the global context, the information situation around you?

–         For example, you have a series of sculptures from paint. Have you been told that famous artist Glenn Brown works in such aesthetics?

–         I am impressed by any events. Just not all of them need to be depicted. But my main theme is a portrait – it has attracted me since childhood. When I thought what I wanted to do in life, first of all I first of all I would like to have a job where I could draw faces: supposably, on the walls, maybe to paint something … That is, the portrait is the main thing for me, I like to contemplate people.

–         In your works, are you trying to achieve a portrait resemblance to the original?

–         Some sculptures were created from photographs, but they didn’t look like their prototype. But, if need be, they can be made similar. I even have an idea to make a series of famous persons of cinema from polyethylene, but I have not realized it yet. However, I don’t have a goal to create a similar person.

–         How important is the figure of your brother, Alexei Sai, who’s also the artist and works in the original technique?

–         It’s an important factor in my life. I always value his opinion. And his art strongly influenced me. We exchange creative ideas, show something to each other.

–         If earlier your creativity was focused on the temporary source (skin sculpture, some kind of clip fastened with another clip, a ball of paint), and photography was the main, now, as far as I understand, you are moving in the direction of creating a lasting object. What is it – a move to a customer who orders the real thing, such that it could be put next to the sofa, or is it some kind of your inner need?

–         Of course, there must be a business, one must do things – that comes first. The artist must produce products that will exist, from durable material. Such an object can be shown and sold at exhibitions.

–         Yes, but still the sculpture must be a sculpture. And I want to do something big, some large objects that will not decompose, which you can touch with your hands …

–         You say that the main genre for you is a portrait. So, where did the series of landscapes come from?

–         I want to do something more complicated, better, more interesting.