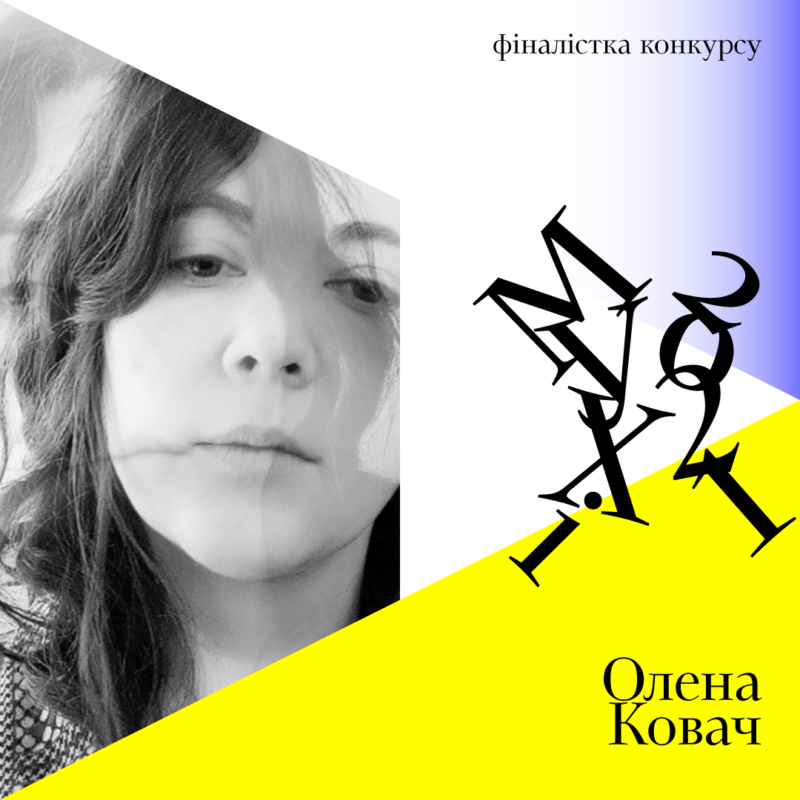 Olena Kovach was born in 1982 in Lutsk. She graduated from the  Mykhailo Boichuk State Institute of Decorative-Applied Arts and Design in Kyiv, and studied photography at the Institute of Film and Television (KNUCA, Kyiv).

The artist works mainly with long-term projects, combining different media. She experiments with combinations of photographic material and other visual languages; in particular, in recent projects she explores the interdisciplinary possibilities of photography at its intersection with theater and performance. She works with topics related to historical memory (collective and individual), forgetting processes, traumatic experiences and the principles of identity formation.

She has participated in the festivals GOGOLFEST, Vizii (Kyiv), OdesaPhotodays (Odesa, Kyiv),  Krakers (Krakow), Do trzech razy sztuka (Poland, Hel Peninsula), and photo book festivals with pilot edition of her photo book Wild Field. She was a Gaude Polonia scholar of the Ministry of Culture of Poland in 2020. She lives and works in Lviv and Krakow.

A Portrait against the Backdrop of the Black Sea in its Absence.
Series of photographic performances, 15 photos, digital printing, lightboxes, photo wallpapers, 2020
In collaboration with the Krakow theater Teatr52Hz, located on the Hel Peninsula on the Baltic coast of Poland.

The performance was born in the winds of the Baltic Sea, at a time when the absence of our beloved southern Crimean coast was felt especially acutely in every breath of the northern horizon. Although the contemplative horizon was much the same, it could not substitute the native scenery; there were holes in it, as if the memory were torn apart.

Olena Kovach invited the participants to take turns to cut their own pieces of the ‘Black Sea’ from a roll of black cloth, against which they were then photographed. Later the artist offered them, in addition to their portrait, their own hole in the ‘Black Sea’ — their silhouette cut out from the cloth in order to feel their own absence against the backdrop of the coast. The poses and moods came from the models themselves, who, while being shot, commented on their feelings in the face of the loss. After the action, having picked up the clippings of the ‘Black Sea’ and on her way to the dump, one of the participants stopped her, saying that the action was not over — it is just a matter of time till the holes are stitched together again.

Mass for a lost home, or the routes of the displayed
Video documentation of photo performance, 15’42’’, 2020

This action took place on a beach on the Baltic coast with the participation of the Krakow theater Teatr52Hz acting as a spectator and simultaneously performing the role of a border, the movements of which repeatedly squeezed the fugitive. A fugitive, a refugee, a displaced person (in continuous mode) makes their way somewhere into the unknown, trying to build a new life somewhere outside of their home.

The artist’s job is to break free from statistics and geopolitical considerations in order to stand beside the victims of these territorial changes and movements. Displaced idividuals. Where? How? What conditions accompany these movements? These are just questions. A person who has lost his/her home has been moved into obscurity.