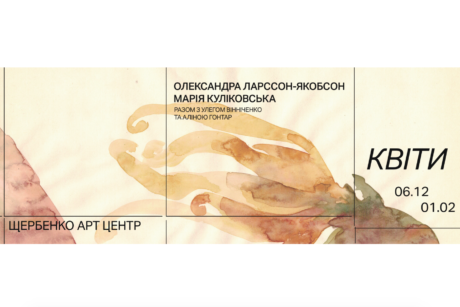 The figurative and semantic content of the exhibition is centered around the Body-Skin-Shell- Membrane-Skin-Woman complex concept proposed by the authors. The project name also contains the semantic ambiguity of the Russian word “цветы”, which is in harmony with the word colors. The artists offer their own interpretation of femininity in relation to personal inner traumas and society, power and boundaries, motherhood and its absence.

Born in 1982 in Halmstad, Sweden. Graduated from the Stockholm School of Photography, a graduate of the Umea Academy of Fine Arts. From 2018 she is studying for a Masters Degree at the University of Arts, Crafts and Design, Konstfack in Stockholm. Works with media such as objects, installation, photography and performance. The artist’s projects have been presented in Sweden, Norway, Finland, Slovakia, the USA and Thailand. He lives and works in Stockholm.

Born in 1988 in Kerch, Crimea, Ukraine. She graduated from the National Academy of Fine Arts and Architecture (Kyiv), as well as a postgraduate course at the Royal Institute of Fine Arts (Stockholm, Sweden). From 2018 she is studying for a Masters Degree at the University of Arts, Crafts and Design, Konstfack in Stockholm. A participant of the MUHi 2011. PinchukArtPrize 2013 Award nominee, author of architectural projects (including the Shcherbenko Art Centre building) in Ukraine, Switzerland and China. Mary’s works have been presented in Ukraine, Sweden, Switzerland, Germany, Austria, the United Kingdom, Spain, and in other countries. Based in Kyiv and Stockholm, operates internationally.

Founded, created and managed by a Crimean-Ukrainian artist and performer in exile Maria Kulikovska together with the architect, director, co-founder of the Gallery-Shelter “Garage 33”, her husband Uleg Vinnichenko since May 2017. Also curator and philosopher Lesia Kulchinska was at the origins of the School. The SPP is designed as a platform for the emergence and manifestation in society of new cultural forms of interaction through performances, happenings, actions in public space.

The task of the SPP is to expose malignant tumors of society by giving voice to marginalized groups of society.

The opening will take place on December 6, 2019 – the birthday of Maria Kulikovska’s father, who lives on the Edge of the Earth, and on the Armed Forces Day of Ukraine.

The project is on the show till February 1