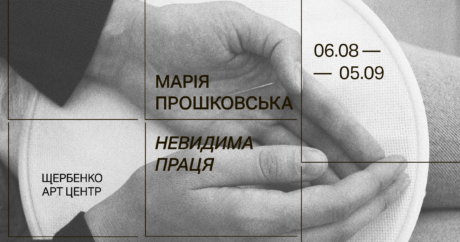 On August 6, “Invisible Labor” project by Maria Proshkowska is opening at the Shcherbenko Art Centre. The project is based on video documentation of the artist’s performance of the same name, audio work, and installation with embroidery hoop objects. The artist began working on it during the SoundID international residence in the Carpathian Mountains while summer 2019 and continued in Kyiv.

After the residence, Maria began to make a performance of traditional wedding rushnyk embroidery. Highlighting the invisible zone of the woman’s daily labor, Maria is making a rushnyk for months according to a strict embroidery scheme and reinforces this idea by the absence of threads.

The exhibition space also contains an installation made of homespun fabric and stones. As Maria comments, “The canvas here is like destiny that a woman (does not) creates for herself as if she is writing her future. As in the embroidery of a wedding rushnyk, she puts her dreams and soul into work and demonstrates her abilities and willingness to make such sacrifices to the society prone to biased assessments“. In turn, the stones as a burden fix the responsibility of a woman and convey the limited possibilities of her development.

Within the framework of the SoundID residence, Maria together with other artists from four countries were researching the archive of the Ukrainian composer and ethnographer Volodymyr Perzhilo. He collected folklore materials traveling to places where resettled Ukrainians lived. Now the project “Invisible Labor” will contain the audio track composed of archival fragments processed by a contemporary composer Kateryna Gryvul. It will also contain the myth by the researcher Ustyna Stefanchuk read by Maria.