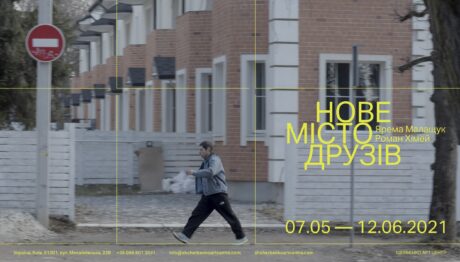 Shcherbenko Art Centre presents the first personal exhibition of the winners of the MUHi 2019 competition Yarema Malashchuk and Roman Himey entitled New City of Friends. This name is borrowed from a poem by the American poet Walt Whitman written in 1867, which refers to the early socialist ideas of unity. However, these lines are almost completely profaned through the discourse of the modern neoliberal system, because utopian ideas are skillfully used nowadays. Especially in times of coronavirus crisis, when unity is what everyone is so focused on.

Artists create an imaginary journey to their hometown of Kolomyia, which cultivates its subjectivity so much that it finds itself in the paradox of history. It is known that half of the city’s population before 1939 were Jews, but almost all of them died during the Holocaust. Later, Kolomyia was inhabited by Ukrainians from the different regions of the Ukrainian SSR and developed as a proletarian city freed from the “dominance of world imperialism”. With the restoration of the memory of Pre-Soviet Kolomyia, the history of Jewish Kolomyia remains in oblivion.

The other part of the exhibition tells about Myrnohrad in Donbas, whose inhabitants otherwise have to prove their subjectivity to the metropolis. Together with the locals, the artists perform a walk through the region, following one of the underground routes to the Novator mine. During the march people walk through the city, plowed fields and bushes. They pave the routes of post-industrial Donbas.

The exhibition includes films and video performances with the participation of citizens who were trying to remember the forgotten or later constructed possible and impossible routes through their cities together with artists.

Originally from Kolomyia, based in Kyiv. Both studied at The Kyiv National I. K. Karpenko–Kary Theatre, Cinema and Television University. Malashchuk and Himey work with different mediums of visual arts as directors, artists, and cinematographers. Collaborated with the Dutch group of artists Metahaven and director Phillip Sotnychenko. The duo won the Grand Prix at MUHi 2019, the Main Award at PinchukArtPrize 2020 and the Special Prize at PinchukArtPrize 2018. Their debut documentary feature New Jerusalem premiered in 2020 at the festival Docudays UA. The film received a Special Award at Kharkiv MeetDocs 2020.