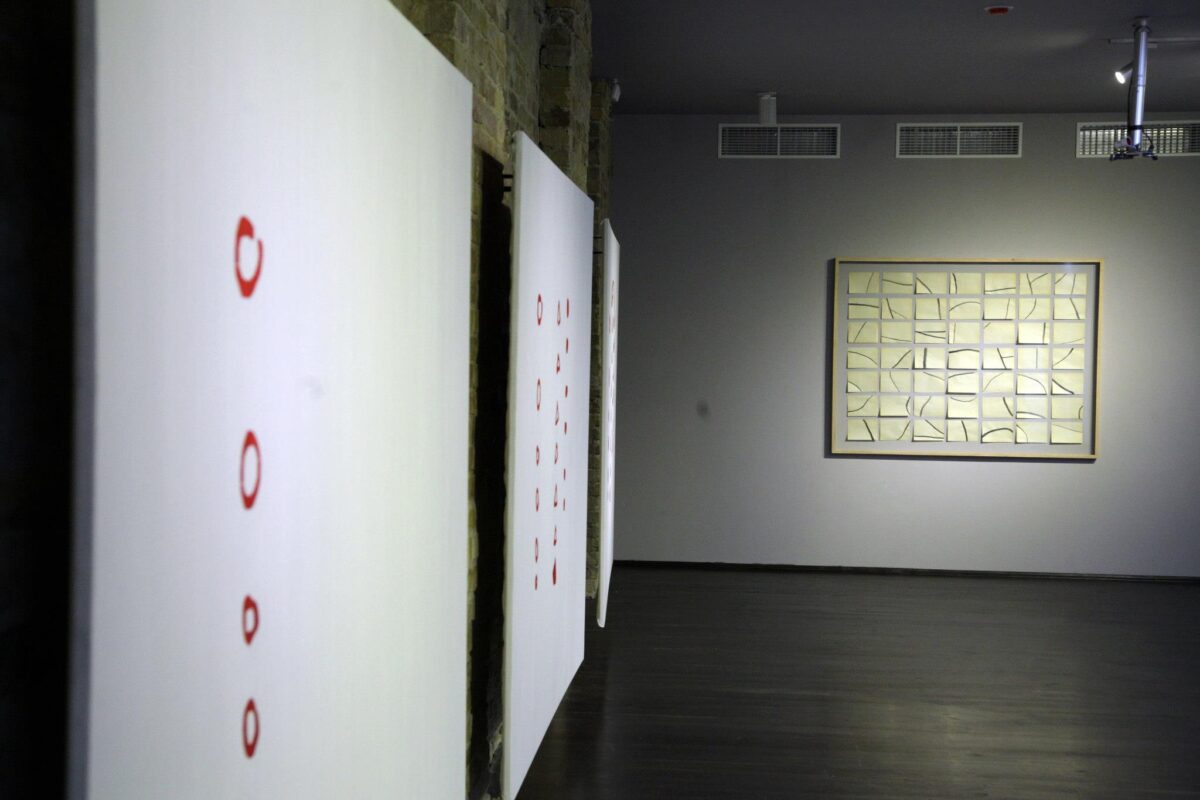 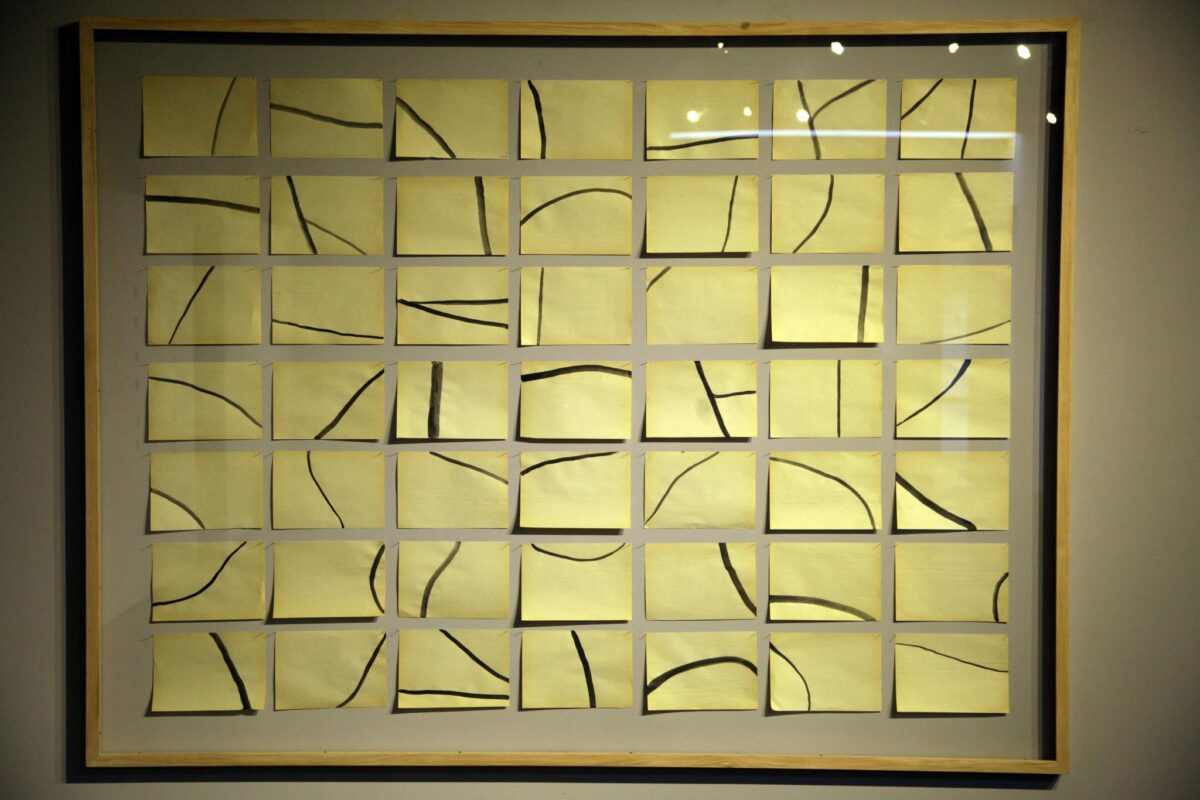 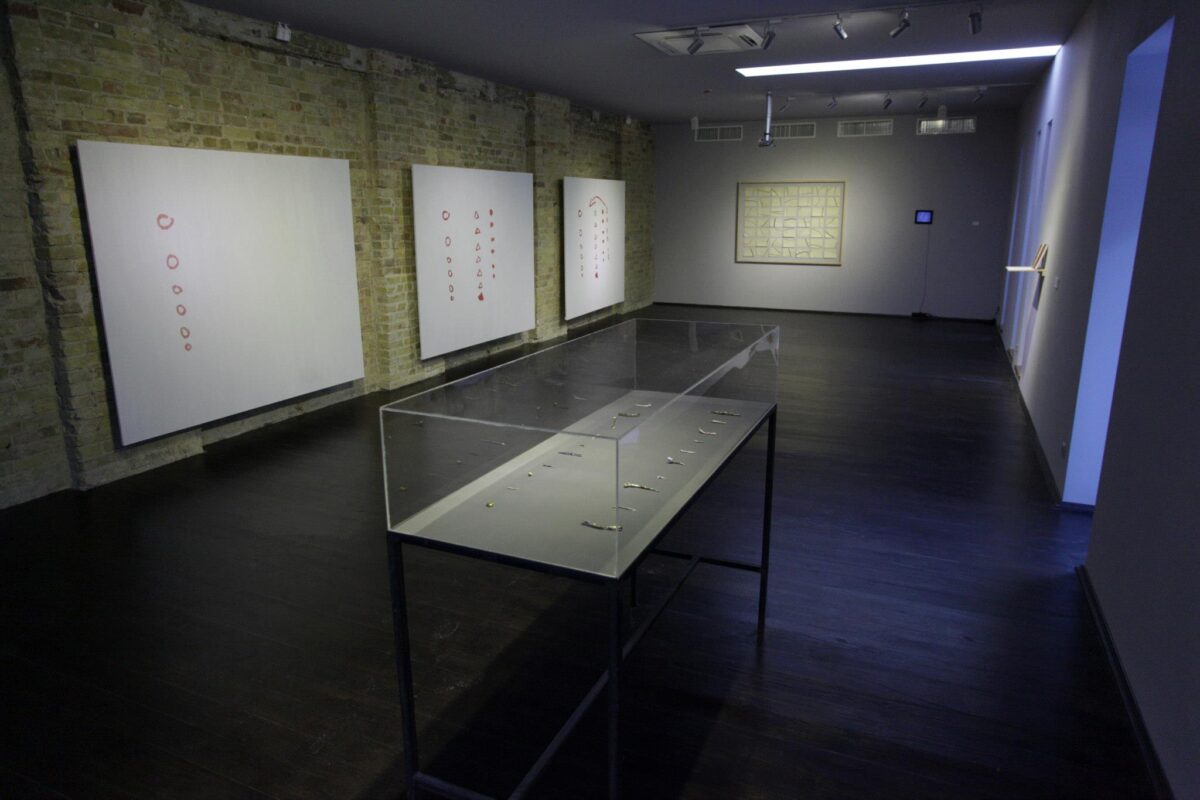 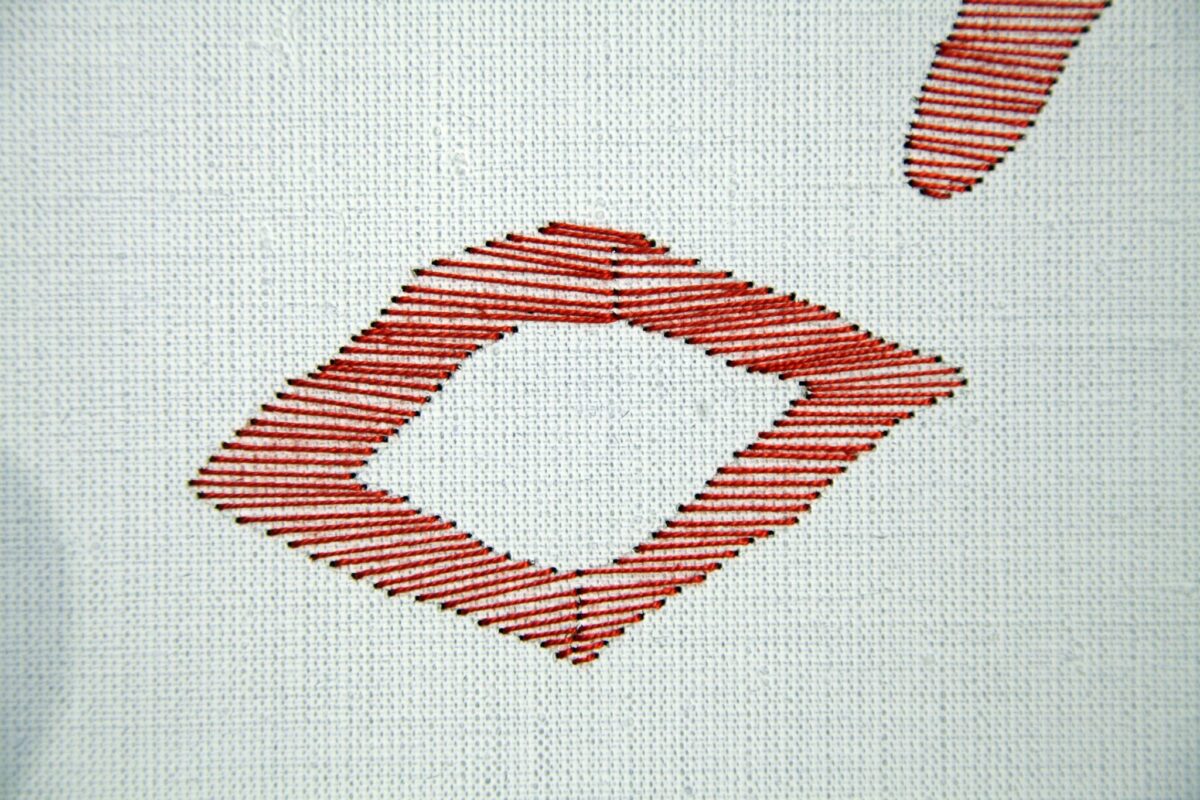 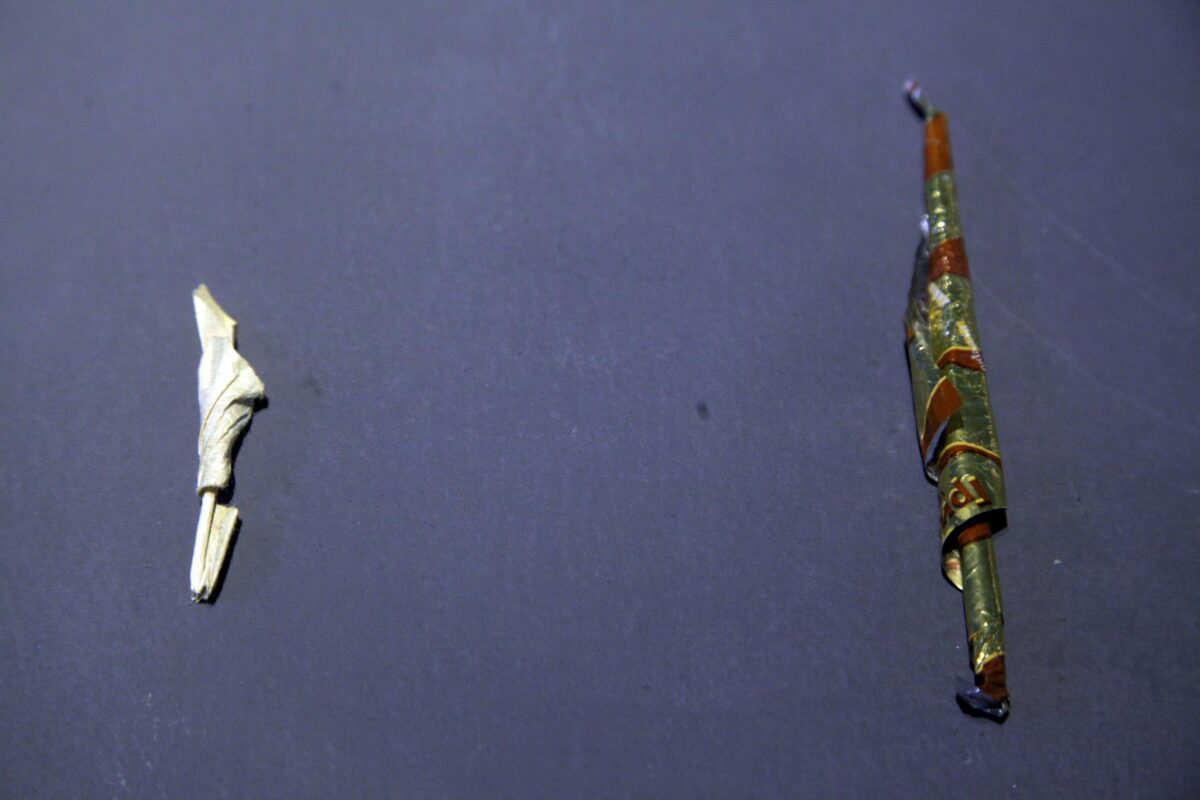 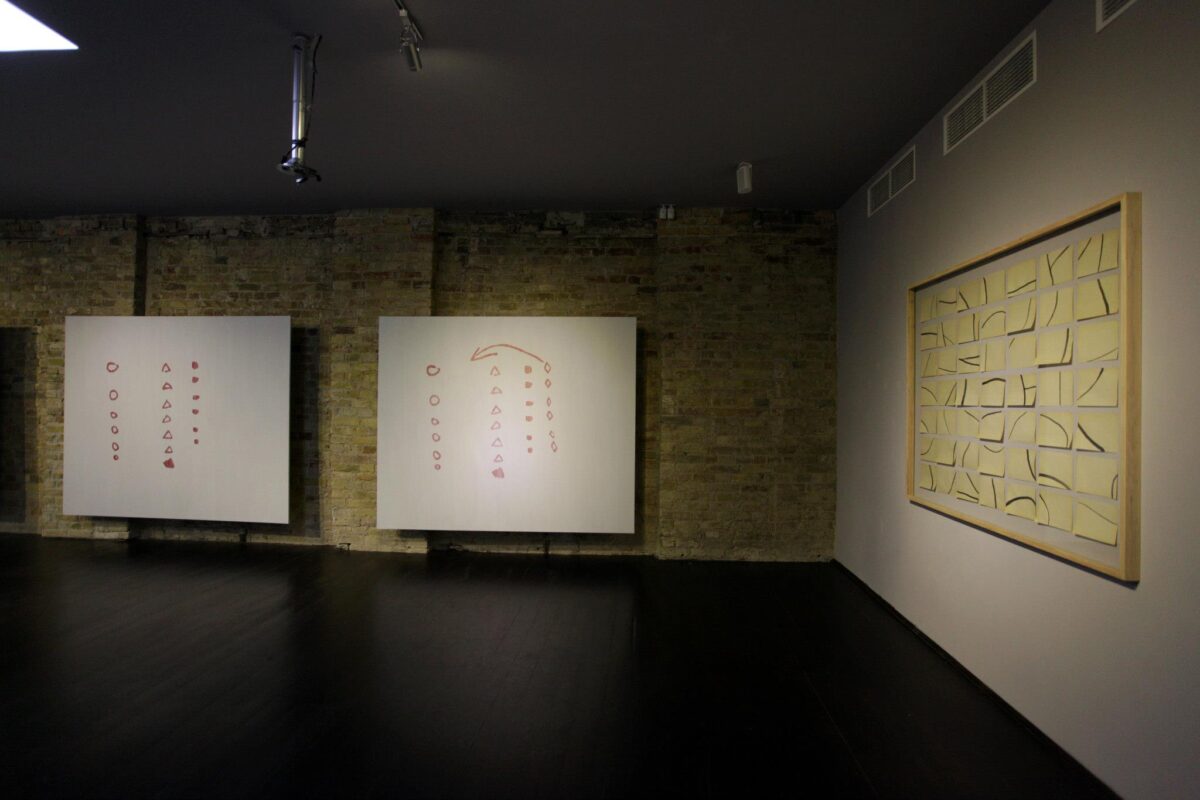 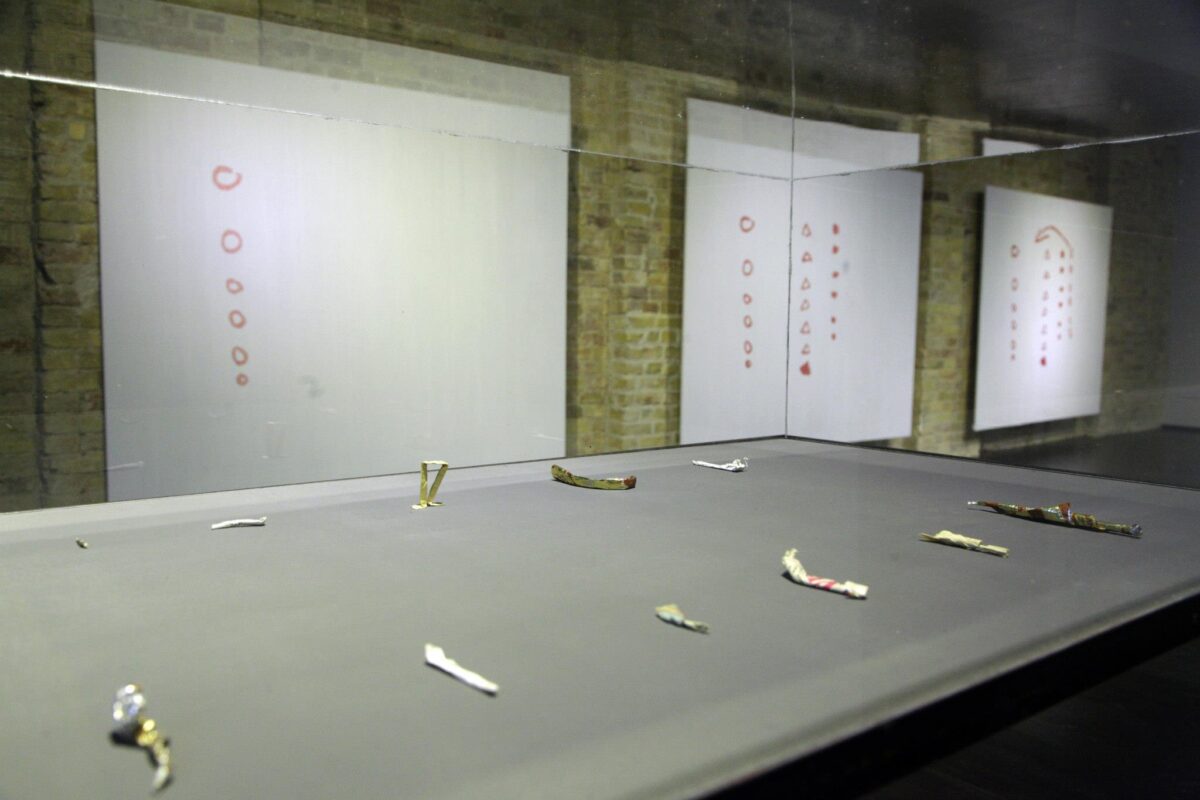 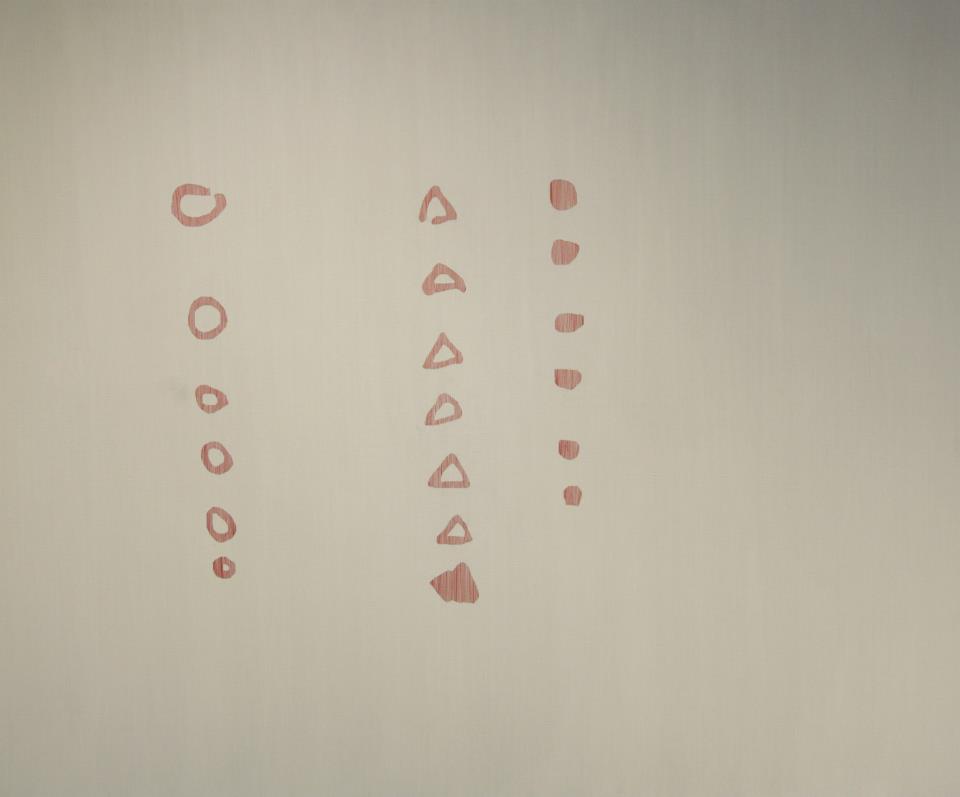 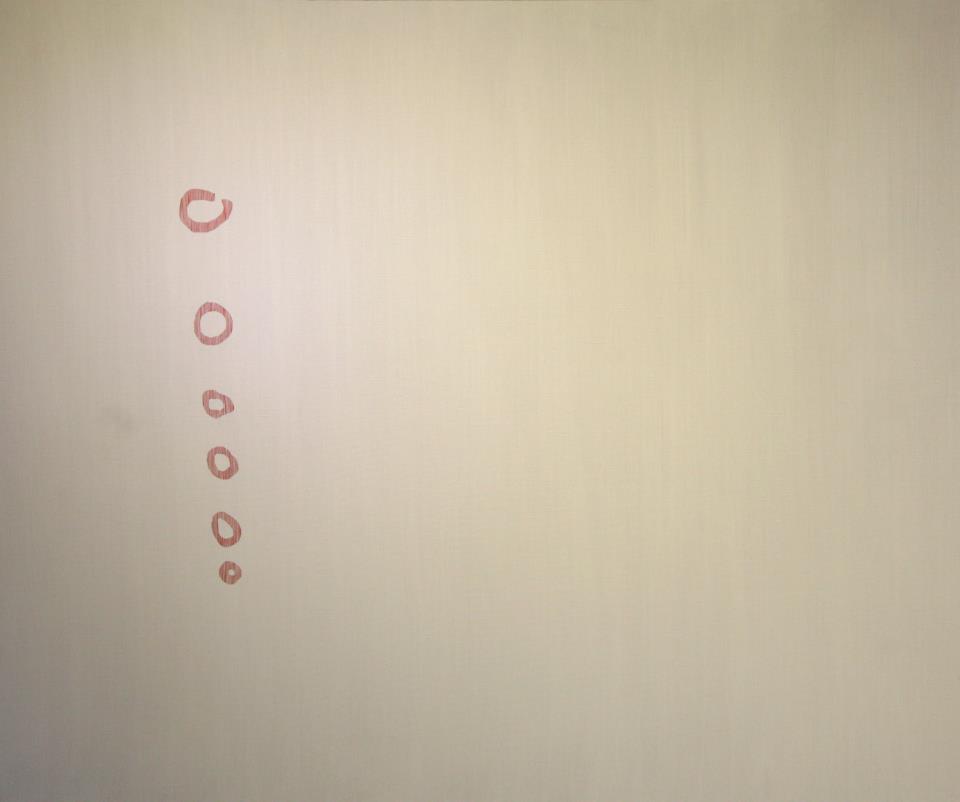 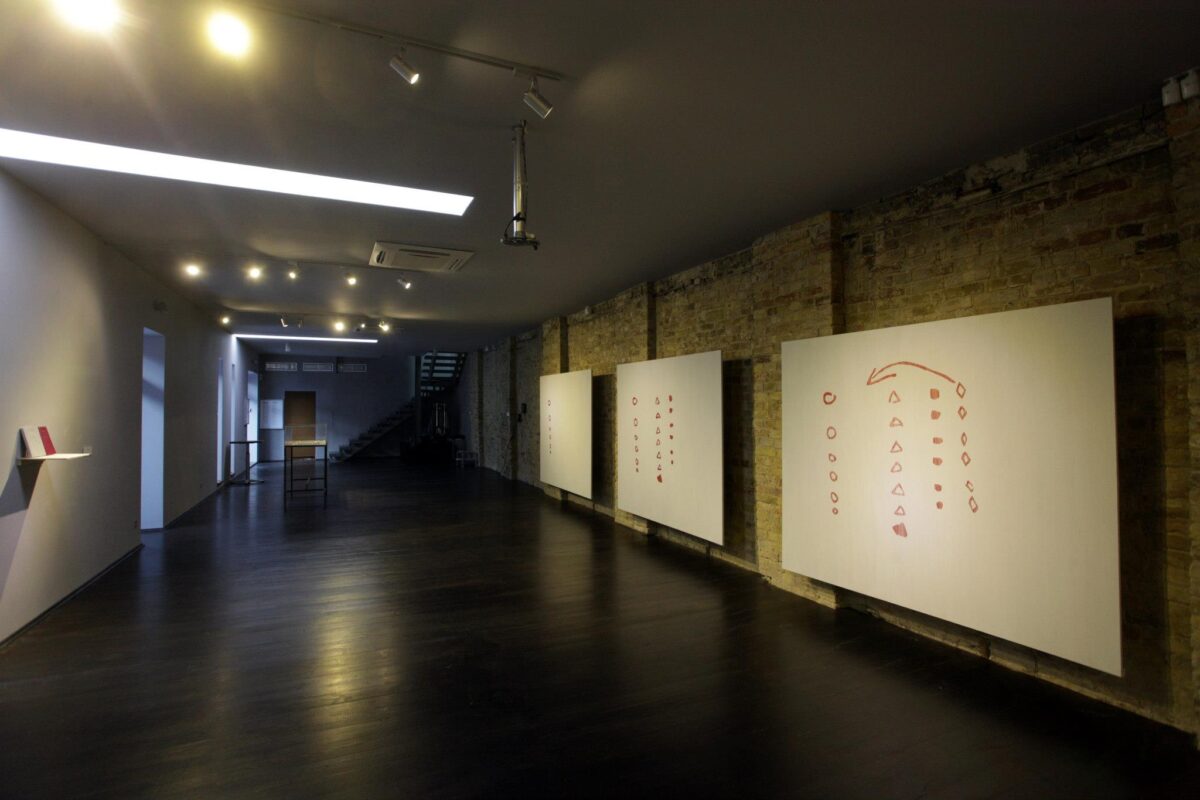 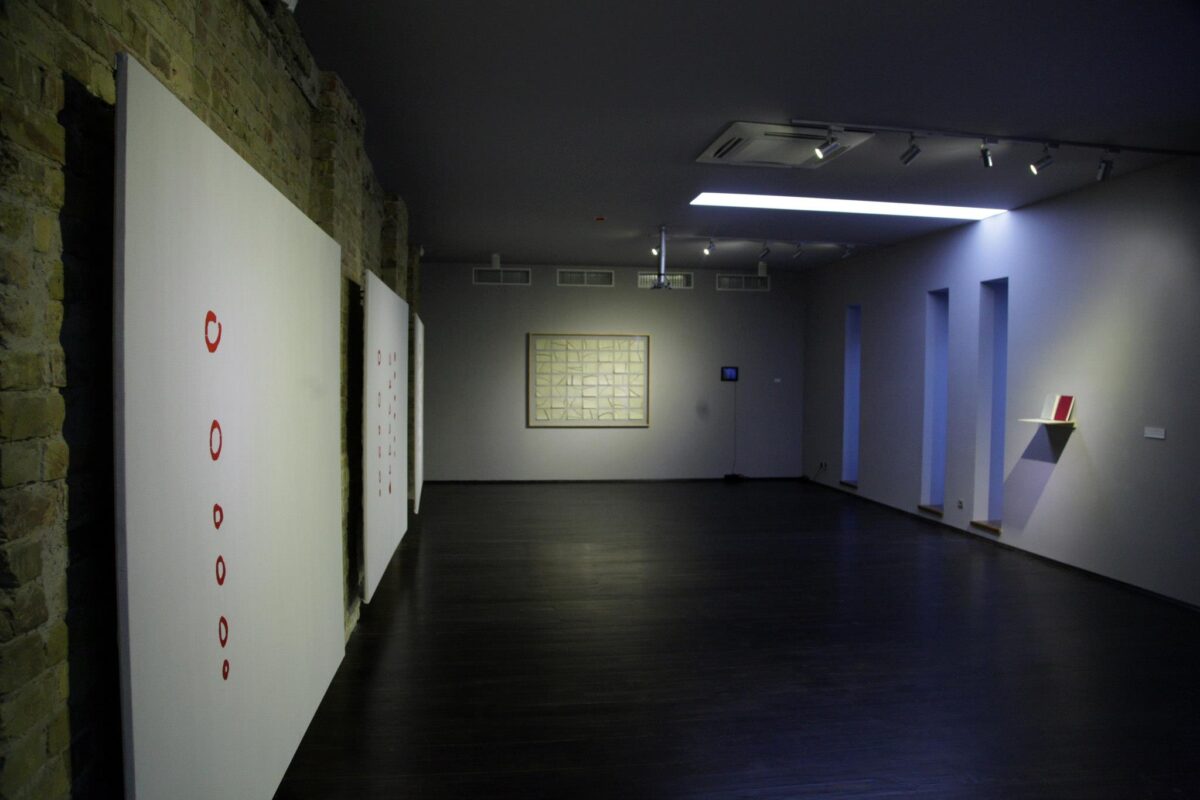 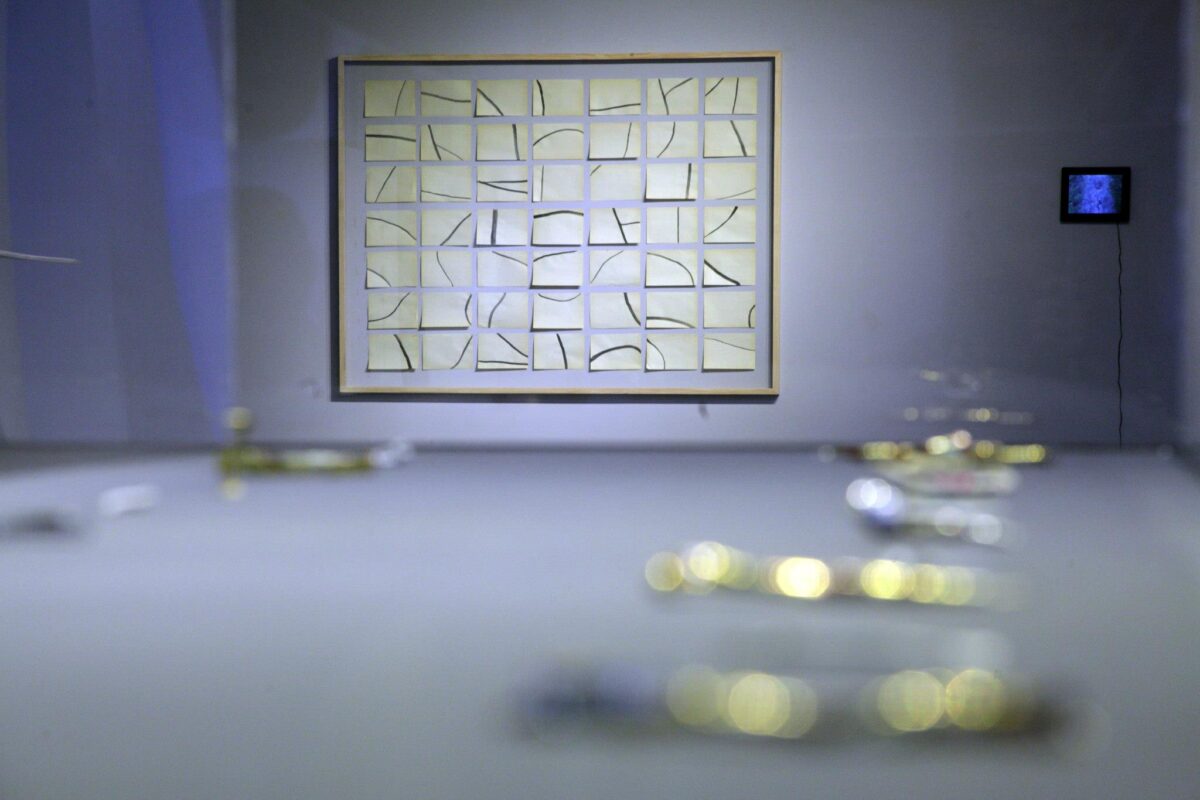 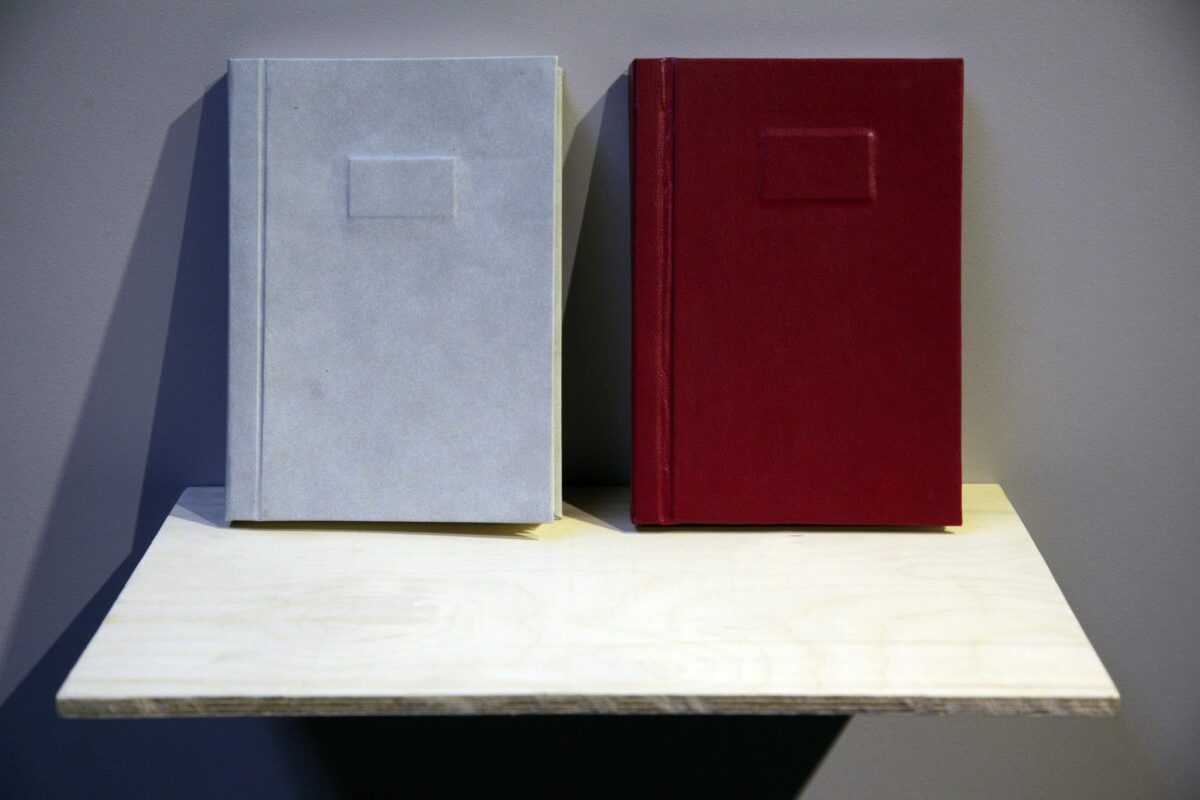 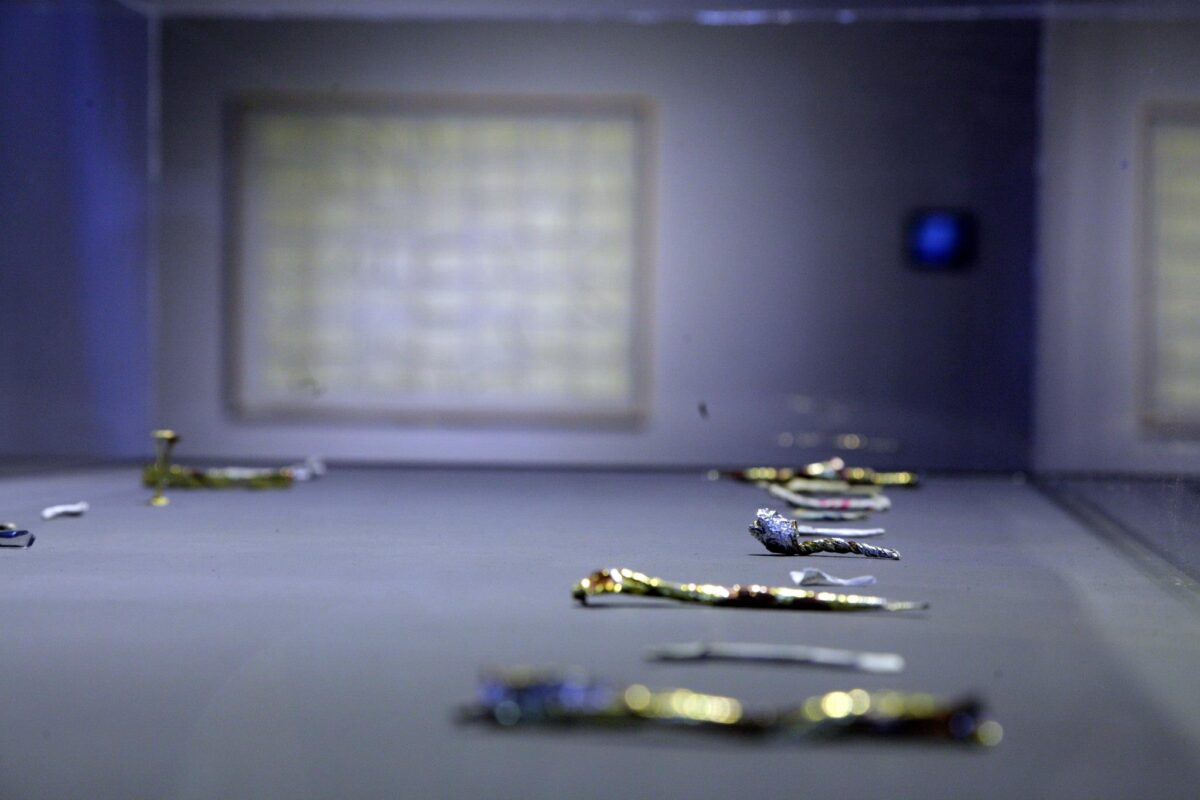 Anna Zvyagintseva, after a few years of the appearance of her works in group expositions, makes the first solo exhibition by displaying not accumulated material – but by creating a new structure, decorated beside gestures. But this design is unstable, “meaning flicker” of each of these gestures makes the overall structure, design exhibitions, mobile and volatile. Actually, the idea of ”trusting movement” in its purity and even literally, here is the only constant.

“Drawings of Piatigorsky”, “Paths”, “Sculptures of my father” – based on the following of someone who knows where to go, or at least look in his motion extremely confident. Several geometric shapes drawn by Alexander Piatigorsky to render his thought, the path trodden many know each other people who did not have paved roads, “sculpture” of candy wrappers have emerged as a result of manual halfminded doings, creative flow is not intended to formalize in the form of “art “.

Drawing of “explanatory” squiggles, twisting foil makes paths taken in their identities, in the uniqueness of their own is not necessary – and turned into an object of faith, trust. Following on someone whose goals you do not know (at best, you can count on aimlessness), there is a gradual recognition of the work, attentive and patient. Selecting an object of trust is almost inexplicable, clear conditions for the beginning of movement in this direction is very small. But conscious entrusting his movement is another way to see this other, accept its reality. Finger movements, spontaneous speech visualization, following the trail through the forest to an unknown person, you become the object of the most careful consideration. Other relatives, or other, endowed with the name and authority, or ring the other, moving in the chosen direction – following every certain way relieves your own goal setting, freeing the movement-as-such, however, illustrated by various observations. But another way to go, falling in the tracks, is impossible. Important are your failures of assimilation to another, microscopic, but infinitely important discrepancies arising intervals, pauses, doubling. “Art” is a way to pass these observations, repeat, pause, then – to entrust them to the next unknown person, which can be called “the audience.”

Fourth work in the exhibition – “Empty book” – is a gesture of refusal to lead, to give a pre-arranged knowledge. It makes pure potentiality – and self-worth is in its unrealized state. Not a book about something, and the book-as-such. No trail to somewhere, and adherence to the path trodden by someone. Contemplation of finger movement or the movement of thought.