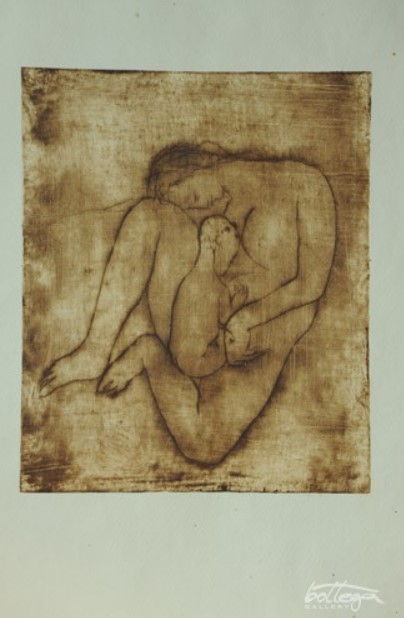 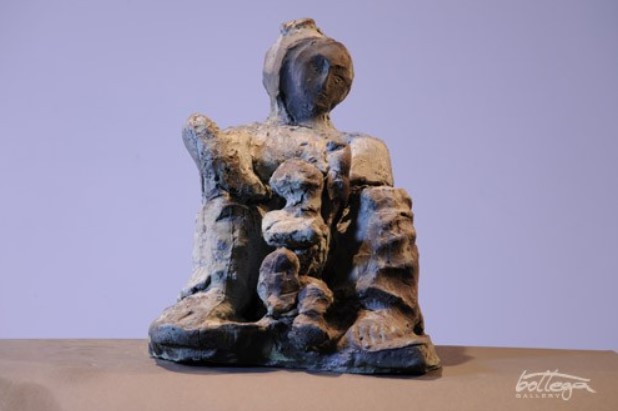 Oleksander Sukholit has already acquired the status of the classic of the Ukrainian art space. He creates his art works for years and allows the rain, the sun and the wind to refine everything that he has created. Deepening in the archaic, ascetic lifestyle, refusal to meat and fish, and also some spiritual practices, everything that may seem strange to the modern urban dwellers and collectors, for Sukholit is called recess. Maybe that’s why his art works are so energetically powerful that the author does not need precious materials and glamorous kitsch to be evaluated as an example of Contemporary Ukrainian Art.
This series of works “Mother and Child” is devoted to the most durable and natural connections: between what generates and what is continuing. Oleksander Sukholit, as always, is not limited to purely physical and obvious (the body of mother and the child), this theme covers much deeper and wider, he examines the initial, irrational, cosmic interaction of humans and the Earth, the body and the soul. Because the nature of these relationships is single – the first gives life to another and the second becomes an extension of the primary. And as the child is like his mother, so the human being is the child of Mother Earth. The author calls for reflection on the origins of the life, the primary source of our breath. The Mother appears here as the Creator, as the Origin and the Shrine.
Oleksander Sukholit has some special relevance to the various methods of expression that`s why this exhibition combines graphics and sculpture. He conveys subtle sensations in his graphics; there is no spatial volume or perspective. There is only the volume of the sense.
At the same time, the sculpture to the author “is an open space, spatial emotions exteriorization and feelings of the personality”, this is the way to speak the space language, the way of the physical embodiment of the ideas. It can cause the feelings of the approaching to the transcendent, but it belongs to the corporeal world.
These works of Oleksander Sukholit are important not just to be read visually, but also to be felt by every cell. They talk about the movement of the energy, the space and world’s essence.