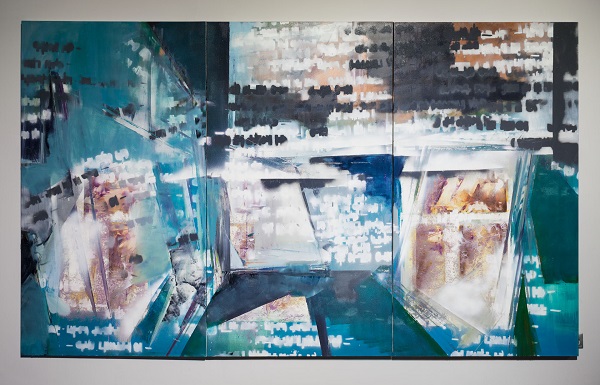 We talked about time, subtle feelings and associations from childhood with the
artist, who tried to sort out time into abstract and very specific imagery.
– How can a modern person not lose the ability to see the subtle in
the world around?
– It is difficult for me to answer this question. It, rather, should be
addressed to the curator who knows the artist, can describe his work.
Talking about ourselves in the subtle category will be immodest and a
little weird. I live as I live. I see the world the way I see. Returning to
studio from any other space saturated with strangers – for me, this is perfect
salvation. I open the door, smell the paint, see the unfinished
canvases, and understand that all this is great. This is my air, what I live,
what I&#39;m willing to share.

– The exhibition “Titles” consists of painting and video art. Why do
you choose such a combination of media for quite a long period of
creativity?
– I can&#39;t say I consciously concentrate on such combination or set
myself the task of using specific media. However, telling my story, I
choose those words that will be adequate for the story. I need a spatial
understatement in painting – it is very attractive for me. Comparing with
poetry, I try not to name the subject, but to describe it, give the viewer an
opportunity to correlate the image with himself. And video gives narrative,
literary understatement. These are two strands that I need to spin my
story further. On the one hand, media, like any technical move, is a tool.
On the other hand, an idea that, personally for me, passes through hands.
I can’t say and, frankly, I do not believe that I can take a ready-made idea
and construct it in a material. After all, some vital things for work arise
precisely in the meditative and ritual exploring of the material. Then
something appears, that cannot be thought through. And, again,
illustrating the idea, the artist can face the problem of &quot;non alive&quot; work. When
there is an idea, there is visualization, but something more important
should still happen so that the work takes place. I recalled the book by
Roland Barth “Cameralucida”, which he devoted to his mother. It has the
concept of “Punctum”, which the author determines the ability of
photography to touch the viewer, which fills the photo with life, gives a
hook that will allow the composition to become real, correlated with
reality, albeit subjective. You watch how life enters into the work,
something incredible happens. The birth of even the smallest and most
unprepossessing work is a miracle. 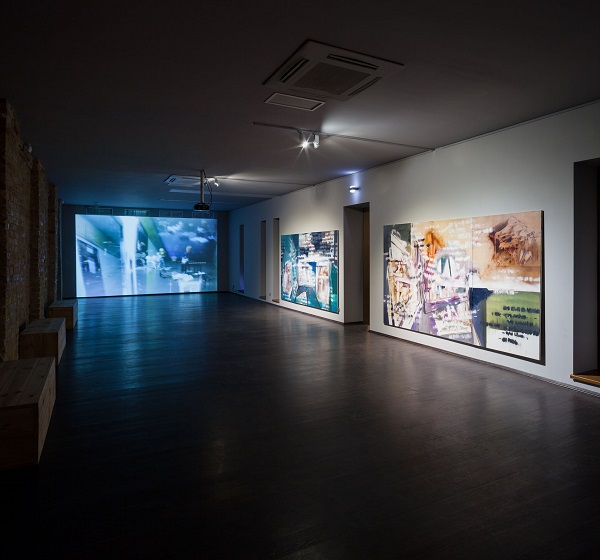 – Still not seeing the exhibition completely, I thought that the
abstract painting, to which you in the “Titers” approached closely,
was often compared with music, for example, by Kandinsky. I
wanted to talk about the tonality of the project. But it turned out that
music is already there.
– Yes, the video is a recording of the end of Vladimir Tarasov concert. In
his words, I would say about the sound at this exhibition. Vladimir noted
that it was “a rattling of energy after the concert”. I can’t formulate it better.
Unfortunately, it is more difficult for me to define by a word, rather than,
by color, light, and everything about the visual world.
I’m talking about titles. What are the titles? This is the finale of something,
perhaps, of the musician’s performances, perhaps of the entire era (its
shadow is visible in Union of Artists corridor, in shots from my video). The

history has already been told, and space begins to change and breaks
down into some elements. It’s not an explosion, like a click in our usual
understanding, but a stretched frozen pause. Timelessness.
My paintings are not abstract. Something happens in every bit of the
image. Perhaps you have a feeling, a recognition that sends you, as a
spectator, to abstraction. Time is surprisingly correlated with the image.
Nobody knows how it looks, everyone nurtures his own imagery. I’m
viewing titles from an old movie, for example, Francois Truffaut of the
1950s, which has survived so many copies that the lines are almost
unreadable, run vaguely, keeping only general outlines. You can only
guess their content. Titles become a moving wall of decorative elements. 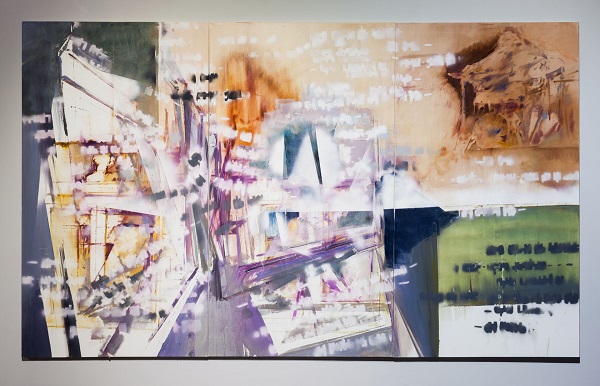 – But according to their semantics, the titles should also explain
something …
– Just right here the paradox is very attractive for me: yes, titles,
according to their purpose, should explain, inform, but with time, like
many other things, they lose their original meaning. Perhaps, in place of
the lost, appears (should appear) another, new sounding. Also,
sometimes we say that time erases triviality from everyday objects. The
semantic paradox here is good because it allows us to consider the titles
as if from the “other side”, read them as a veil, a boundary.

– Black, blue, gray – from a position, for example, one of the
methods of psychodiagnostic, this color palette is very disturbing,
which speaks of internal conflict. Is there such a conflict?
– Sometimes explanations are very simple. We’re talking about movies.
The blue of the old TV through the movement of the film – it is not
alarming, rather, on the contrary – calming. Screen flickering, the lack of a
clear image and bright colors – timelessness offers its palette. The film, in
this case, can have dramatic content then, probably, the conflict about
which you speak is possible.
– We recall the old movie that returns us to childhood, to sincere
emotions. Can we say that with help of such deep associations you
lead the viewer to pure sensations?
– Yes, totally agree with your words. There is a general history, and in it,
of course, there is staging, theatricality. Experiencing strong emotions,
situations, a person can say that it was like in a movie. Modernity with its
own pace, the flow of information, models of behavior is such that for a lively
response, immediate reaction remains a little space. In an aggressive
environment, before the need of protecting first of all, a man, I think,
increasingly wants to return to himself, to something close – small, private,
unique – such as the unique human memory that is born and dies with us.
It stores all the most important things, what it is necessary to return to.
– For me, your creativity is inherent in Kyiv, but recently, as it
seems from the outside, you moved away from this topic. Is it
really?
– Everything that I do is somehow connected with the Place where I live
– Kyiv. It can be unrecognizable at first glance, as, for example, in the part
of the video where the corridor from Kyiv Union of Artists slips. Service
post-Soviet premises with their spirit, color, and smell – this is also part of
the history of this city, and a huge part. It’s just not so much “pictural”, and
so general that there is no quick recognition. My conscience is clear – I
still describe the space to which I am sincerely attached, which I treasure.
The story goes on – I’m shooting, doing new work: Zhitniy market, the old

sewing machine and hands of my neighbor Anna Evgenievna, the
passage of my front door, the mailboxes are all expensive, necessary. 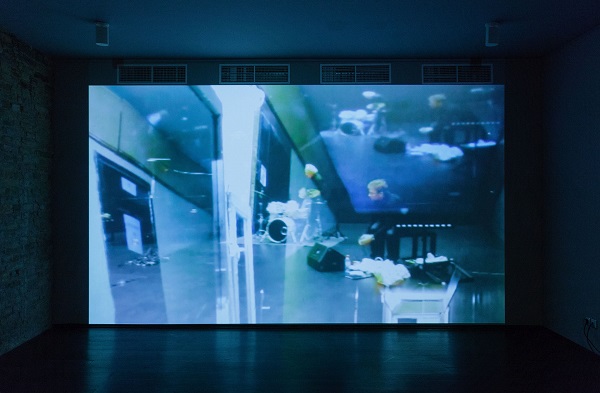 – Continue, please, the phrase: what cannot be understood, you
can…
– Feel, first of all. For me personally, a lot of things are easier to
understand through work, hands and the way I say. But, again, what is
“understand”? What do we mean by this word, if not go through stamps?
Are we talking about accepting or correlating with ourselves, constructing
or inventing again?.. And let our explanations be absurd but believable,
so that someone else can feel them and agree with them. Then it will be
possible to say “understand”, perhaps.