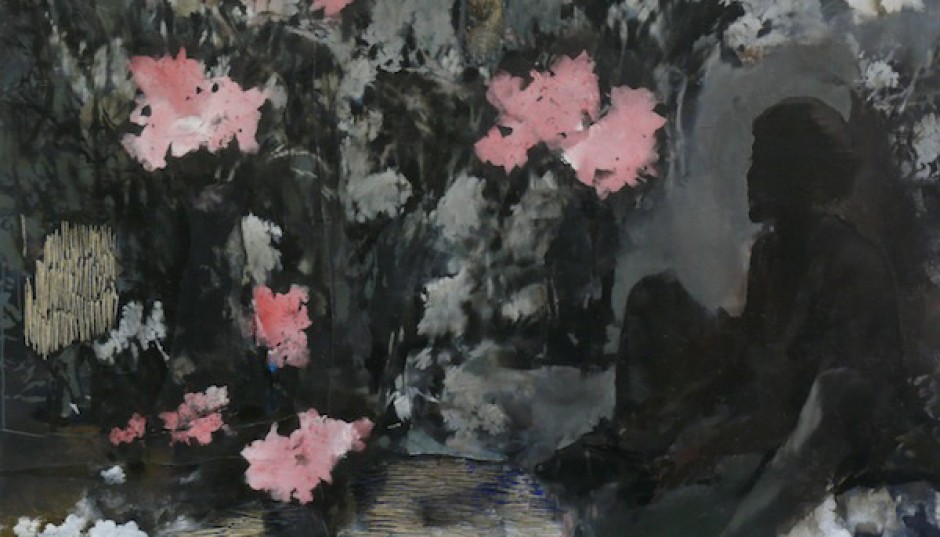 This text – a conversation between the two artists about the exhibition “Darning” which was
shown in the Bottega Gallery from October 15 to November 8. Recall that now Bottega
represents the continuation of this project in the context of IX Art Kyiv Contemporary, which
will last until the end of this week.

Alina: I thought it would be good to compose our conversation on the go.

Alevtina: In any case, let’s talk about your exhibition.

Alina: We’ll take her as a starting point. Thank you for coming. What’s left for you now, when
the exhibition was closed and the work does not hang on the walls, after many events that have
already taken place – is there something left?

Alevtina: I’ll say this – it’s more properly to have painting at your home – it would be your
everyday interlocutor. One work hangs in our living room, I look at it every day, and do not need
to remember. But your work is in my memory – I can revive my memory in order to remember
them. I can also remember my feelings and what my friends said about it. There is a difference
between memory and frequent and constant communication. I’m a big supporter of collectibles.
While I do not produce objects, of course, my drawings are also partly objects, but mostly I
produce stories. A painting I imagine as a communicator without history, regardless of the text,
which can be close.

Alina: I do not have the text.

Alevtina: You do, but there can be a lot of text at Tiberiy Szilvashi’s exhibition. Although I saw
his work in several houses and I wanted to talk about them with their owners. Coming back to
the memory of your works – as Vova (Vladimir Babiuk) said, whose opinion always remains
uninvolved, – Vova said about it like this: the Vrubel palette. And I thought – is it so? You had
such purple, gray, such complex a blue shade – I remember your painting so …

Alina: I’m giving a lecture about Vrubel, in Closer, by coincidence.

Alevtina: So is Vova right or not?
It is difficult to decompose the painting into shades; it lives as a single organism. And from when
does it start to live? We are working with very different forms – your form always remains open
to the viewer, it cannot be touched and felt as my works. You can continue. Although, basically
we both collect actions, words, actions, shades. Our works are stored in memory in the same
way. Can you define the difference between an open and a closed-form?

Alevtina: I’m generally for the artist who can come to the collector and remake the work.

Alina: And now you are the keeper of the completed form.

Alevtina: The context is changing, and what seems to be closed and still form is no longer the case. And your painting in a new context is read differently. There is no completed form.

Alina: The work lives while it is interpreted, while it causes emotions.

Alina: It seems that any random piece of life can turn in history or an event into your hands.

Alevtina: It happens that there is no inspiration, we wake up in the morning and do what we do.
And sometimes there are more productive days.

Alina: It’s like poetry, when it’s completely unclear what inspires us, the string or the sunset –
when neither one nor the other belongs to us.

Alevtina: I am a bit complex like many others hearing the word “inspiration”. The truth is that
every morning you come to the studio, answer emails like an office worker, and so it can go all
day. Actually, there is a constant willingness to do anything. Accident also exists for me – when
there is a non-standard situation for me or a reaction that does not fit into my usual set of people
or events.

Alina: And on the contrary – something habitual appears poetry, becomes part of the form. I come to
my favorite hardware store that exists from Soviet times, and sort through, revise the usual veils,
brushes, screws, and bolts searching for the right word. And, surprisingly, I find it by accident.

Alevtina: Accident – what is it? I think my project with the plane was an accident – the employee
of the fund &quot;incorrectly&quot; understood the text of my letter, in which I ask Mr. Akhmetov to draw
land from the window of his private plane “I am late for a plane, which cannot be” supported by Rinat Akhmetov’s Foundation for Development of Ukraine). Any work is a thrown ball- it may fall like you imagined, or not at all if the “wind blows” …

Alina: And can you remember the work began from an accident? My Darning actually happened
just like darn – a large canvas was accidentally torn during transportation. I remembered my
grandmother once taught me to darn – and with the coarse threads, I restored the structure,
weaving, replicated the canvas, its texture – as an element of the painting. The line and its depth
has changed, the work awoke and needed continuation.

Alevtina: I started doing performance because of the instinct to survive as an artist – to bring my
ideas into a different form (there was an installation before that always costs resources – money).
For my performances often only a microphone is needed.

Alina: Do you feel a big difference?

Alevtina: Of course, it’s like you do with painting: you’ve finished and go aside. Two steps – and
you see. You can see the installation and see the painting.

Alina: Any work starts to live with the appearance of the viewer.

Alevtina: Yes, that is. Believe – in your work you can assume the reaction, ask or see how the
viewer looks. When you do performance, you are inside, you can only imagine yourself. I do not
know what I’m doing actually.

Alina: Do you watch the material afterwards?

Alevtina: For instance, I have the excellent quality video from the Hermitage (performance in the
Manifesto 10 in St. Petersburg “Walking To Africa / About Ukraine under the Law of the
Russian Federation), where you can see that I’m talking slowly. There’s incredible acoustics. Do
not say it slowly – all my words would be eaten by an echo, every quick word would sink in a
huge space.

Alina: Echo – a beautiful image. I want to talk about the light and about the paintings that were
exhibited not in bright light, but in semi-darkness or darkness. About the pictures that dissolve in
the dark. There remains the smell of paint.

Alevtina: It’s important where the picture hangs. I discussed with an artist an important question:
the restriction for using his works, that were selling on MuzychiChristmasArtFair. He did not
want his work to be hung in the toilet. I thought about it for a very long time, because I placed
my work in such a place in our house …. The perfect place, in my opinion. To the difference
between a picture and a performance – in the second it is difficult to achieve the perfectness.

Alina: But there is a form you are ready to agree with.

Alevtina: Yes, of course. But sometimes there is nothing behind the form. The most terrible
enemy for me is Mannerism – borrowing a form without filling it with new content.

Alina: Is this a form devoid of life?

Alevtina: Yes. On the contrary, the case of your torn canvas is an example of a live response, a
case that happened in real time. Why did I mention Mannerism? In time of my studying at the
graphic faculty, several graphic artists that successfully worked with the carnival theme were set
as an example to me. I did not understand why I did not care. Now I know. They, those young
authors, did not see the carnivals … They looked at the painted carnivals. In 2004, I went to
Maastricht (the Netherlands) and saw a carnival …

Alina: A year ago in Barcelona, we got to the carnival on the Three Saints Day – we stood in the
first line, under the candy rain. Everything hopped off and sparkled incredibly bright. What a
house-high paper figures with light and people inside wave us with its heads! What to say –
fortune.

Alevtina: Carnival was one small injury for me. I decided to participate (to be with everyone),
but I could not. And so there a story for the performance appeared. I decided to be a Christmas
tree: I attached green papers to a plastic garbage bag and … Actually, carnival costumes are
prepared for a whole year or bought in special stores. It is sewed strong. And my green papers
fell off in the first pub: I turned from a Christmas tree into a garbage bag. Now I have a story
about how difficult it is to be with everyone and what it&#39;s like to be with everyone!