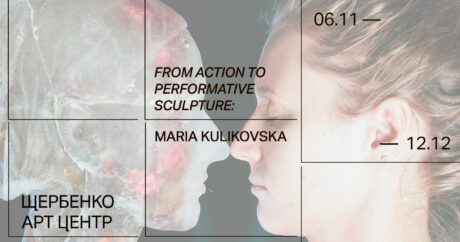 “From Action to Performative Sculpture” is a mini-retrospective project of Maria Kulikovska’s performative practice. The show selectively presents the most significant projects and works of the artist made in this medium. It is also an analysis of previous performances that are always created on the basis of performative sculpture and vice versa – the sculpture is created through a performative process and is subject to interaction with the environment in the future.

The cross-cutting line of the artist’s work has always been an issue of political conflict in her homeland. It is also a research of territorial borders and then individual boundaries of one’s own physical body through construction and destruction of its casts; the position of women in this conflict and society in general. Therefore, the exhibition invites the viewer to move through the constructed space of actions and sculptural series, their video and photo documentation, artifacts, and sketches to further embodied ideas. All these pre and post-documentary fragments of artists’ practice will become points of intersection and will make it possible to build the connection of gradual and integral Maria Kulikovska’s artistic expression.

The exposition narrative begins with video documentation of creation of the sculptural series “Army of Clones” in 2010. These sculptures were shot by militants in the occupied territories four years later. Then, the thematic blocks present a number of actions that fully or partially respond to these events and refer to other thematic points of practice.

As the artist herself comments on this exhibition: “It is a form of presentation of all the work I did and an attempt to analyze whether it has results or society needs it. Hasn’t it turned into a marginal statement that is now unpleasant or stigmatized? This exhibition is also a manifestation of the political performance existence in Ukraine that is often ignored by the authorities due to the lack of established cultural diplomacy and politics”.

Born in 1988 in Kerch, Crimea, Ukraine. She graduated from the National Academy of Fine Arts and Architecture (Kyiv, Ukraine), had a postgraduate course at the Royal Institute of Art (Stockholm, Sweden), and got a Masters Degree at the University of Arts, Crafts and Design or Konstfack (Stockholm, Sweden). A participant of the MUHi 2011. PinchukArtPrize 2013 Award nominee, author of architectural projects (including the Shcherbenko Art Centre) in Ukraine, Switzerland, and China. Maria’s works have been presented in Ukraine, Sweden, Switzerland, Germany, Austria, the United Kingdom, Spain, and in other countries. Based in Kyiv and Stockholm, works internationally.