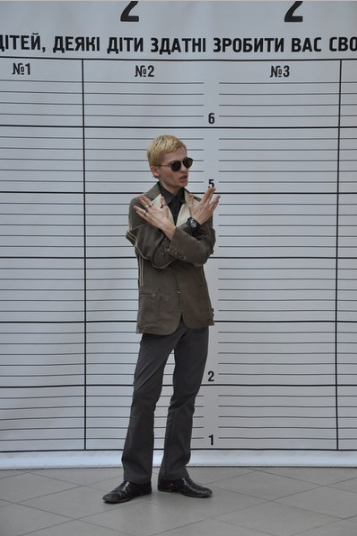 DANIL GALKIN: “WE DO NOT RESTRICT OURSELF WITH CEILINGS, BUT WE ARE WALKING ON THE ROOFS“

Contemporary artists do not restrain themselves from traditional tools: canvas, paints, brushes; today they use any environmental objects, give them shape, fill them with content and, voila! – the next artifact is born, recognized to be called the object of modern art – a phenomenon ambiguous by definition.

I had a chance to meet Daniel Galkin a couple years ago in Kiev. At the same time, I was lucky to visit the museum complex “Mystetsky Arsenal” at the exhibition of young Ukrainian artists, where Daniel’s “Vivisection of the Personality” was exhibited.

So, meet, artist Daniel Galkin – the creator of the experimental Art group “2222“, working in the genre of dystopia.

“Art-group“ 2222 “consists of alternative personalities of one author“ – sounds very intriguing. Intrigue is growing at the words that you “renamed into a number when you discovered in yourself a penchant for modern art.” How did you get to that a life (laughter) and what was the impetus for the birth of the art group “2222“?

When you are born with two left hands, and later four more alternative personalities appear, nothing remains but to come to terms with it. If you decipher something, then in the process it loses its magic and attraction. These numbers contain the code that appears in the list of references to literature, cinema and music, which is the material for the alloys, which later form the letters of my name.

The art group “2222” loves clear “messages”. Each your project is a new portion of food for thought, always unexpected and provocative. Is this art focusing on everyone or on a certain category of people?

People without a certain social and personal position need to hear the guiding words, but we redirect them in the reverse order – towards self-identification. Our messages usually sound like lines from the national anthem, where each word is aimed at a specific group of people.

“Art belongs to those who dare to be alone with it, to share not only the first night. It is always very individual. ”

I think our audience consists of those who are able to overcome all obstacles to finding the way to themselves and to open themselves to others. And also from Protestant advertisers.

As far as I know, one of your paintings is in Ufa in a private collection. But in recent years you have been working mainly in the installation genre. Is painting for you in the past?

The canvas is a fabric, and the fabric consists of threads. Me, as neuropaste, pulling the threads in space. I am looking for the best way to present each of my idea, not limiting myself to two planes. Now, for example, we are working in a traditional media, producing a series of canvases called “Bureaucracy: A to B”, which is part of the “Lower State” project. This is evidence that we do not disdain any canvas or paint.

Tell me about “Brooches of Fear“. This thing is very mesmerizing. It seems it is not devoid of magical properties.

The brooch of fear is one of the symbols of the power of the “Lower State”. One of the physical evidence of abuse of official duties. It has an occult meaning, but I have no right to talk about it.

You often mention the “Lower State“. What is it?

“The Lower State” is a long-term large-scale project. The open day is already scheduled for this fall in Kiev, and in Moscow next May. The project will open at six platforms with short distances from each other.

How much does the “2222” Art Group approve of such elements of presentation as outrageous and pathetic in the works of contemporary artists, including their own?

If an object of art looks very modest, for example, a bottle of lubricant, but at the same time it sounds pretentious, like a hymn, then everything is fine (laughs). Loud sunts are not always justified by art. Nihilism in art or fooling around is always obvious. If it is justified ideologically or framed for the custodians of public morality, there is always a positive result. This is a process where defendants and jurors are on the same bench. Fuel is always added to the fire for those who protest , thereby igniting the fuse previously provided for by the instigator.

Art-group “2222” is on the selected road and takes sure steps. What principles do you follow in your creative way?

I follow my intuition and if something goes wrong and it is impossible to retreat strategically, a new project is born, that satisfies both sides. Therefore, we do not limit ourselves to ceilings. Inspiration is one of the endangered terms in the artist’s vocabulary. This idea may not depend on inspiration, but on intellectual work.

It seems to me that in your project “Absolutly Mythical” we can see the process of developing idea, how it is assembled from parts, it grows, becomes stronger, and finally materializes.
And yet, with the help of annotations I hit the number of global references (the film “Blade Runner”, etc.). It turns out that people without certain knowledge does not split “this nut”. How justified is this cluttering with information? After all, all ingenious can be simple.

Some references are stem from the dark events in which this project was presented – “Revival and Apocalypse in Contemporary Art”. If a work of art is self-sufficient,  than it does not require a description and must be read by all “users”. And any summary should be only a support, a platform. Can I find a balance – it’s not for me to judge. But I agree with you, there should not be too much similar links, otherwise the work will turn into nothing but graphomania.

What would you wish to those who come to your exhibitions?

I wish everyone to remain themselves and to sacrifice only those things, that contribute to the self exploration as a part of the microcosm in the macrocosm, and vice versa.