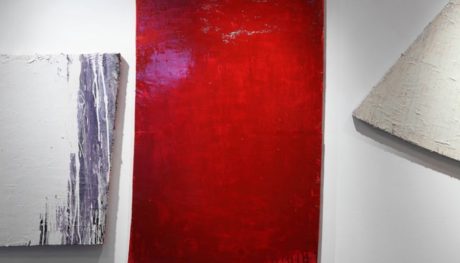 T.S.: “It seems to me that this problem arises out of a crisis in language. The art of painting is timeless, it does not die; if it dies, it is not art. Actually, painting is a craft which in special cases is elevated to the level of art. It takes many years to learn this craft and its language, and at a certain point these is a separation of reality and language, which is usually inclined to be conservative, and the language loses its energy. Then, in fact, painting is not alive, but only imitates life.
Painting is one of the fundamental arts, like music, poetry, dance. And while these is at least one person who practises it, there is hope that painting will not die. Remember what Grotowski said, «If there is a well, someone will drink from it. It is important for the well to be there, and the rest is up to passer-by. Whoever cleans the well should not be thinking about whether someone will drink from it or not».
Painting is not disappearing, rather it is acquiring new forms. Certain types, genres, phenomena become sidelined or die off, and functions which no longer apply to painting move into other arts – its language becomes cleansed. Possibly, some day painting will be for the better. In not speculating with actuality, painting will cease being an object of manipulation. The experience gained from painting cannot be gained by any other means.

J.O.: The Western tradition, the idea of painting as a window into surrounding reality (as expressed in Alberti`s 1435 Treatise on Painting) – are these things worth considering?

T.S.: Yes, the same as any human experience, because in truth we all (consciously or subconsciously) are born from the loins of Judeo-Christian culture, and the classic painting is absolute expression of this culture – a formal, plastic expression.

J.O.: The Eastern (Orthodox) tradition, the icon – is it still alive?

T.S.: As a sacred object, yes. But for the faithful, icons live and have a completely different value than for the aesthete.

J.O.: “A picture is worth a thousand words” – what story are you showing\telling?

T.S.: There was a time when I told stories. It is doubtful it pieces I do now can even be described as paintings; they are sooner coloured object (not painted, but coloured), objects to be regarded. They aren’t intellectual constructions indicating or symbolising something; they are reality – a frame with canvas, covered with paint, from which the viewer draws direct experience.

J.O.: The history of art – is it the works, or is it also the commentary?

T.S.: Both. Every work coming under the scrutiny of an interested viewer becomes not only an object to be regarded but also an object to be interpreted. The range of the interpretational field depends both on the work itself and on the taste, education, and cultural tradition of the viewer. That is why the history of the arts comprises both the museums and the bookshelves of commentary. They mutually complement one another, being two sides of the same coin.

J.O.: Is what you do beyond the time?

T.S.: Timelessness is in the very nature of painting. You belong to your time, and at the same time you are part of the great process. I feel an affinity with the painters of the past, I swim in the river of colour they swam in, and the river future painters will swim in. All the same, obviously the energy of colour changes in time; it is different in the 20-th century than it was in the 19-th or the 15–th.
The same way, he paintings of the 1960s or 80s have a totally different energy than the paintings of the 90s.

J.O.: Can you painting be defined as “total visual experience”, like an equivalent of our world experience?

J.O.: Matisse said, “My painting is like a comfortable sofa” – what do you think of that?

T.S.: Well, Matisse said this at a particular moment, and he was polemicising with a particular historical situation, with the people of that time. It was clever, certainly, and I would say that only a true painter could have said it. Painting is the art of seeing, and if anything else needs to be said, maybe its best to say, “Well, look, it’s just like a sofa”.

J.O.: Is that which we call style meaningful for you? Working with assistants, what is your attitude to the concept of authenticity or originality in painting?

T.S.: I think its better to talk about language than about style – in any case, with regard to this project. Working in space is a conceptual thing, and so it is not so important that you do it by yourself. And it’s very good when the people helping you understand you and are considerate.
But the painting process s always a lone, intimate process. As I said before, it is total, individual visual experience alone. It’s always an adventure, a trip you take without knowing when you will come back. A project, however, gives you a goal and an exact finish date, which you have to remember; these are disciplinary factors.

T.S.: This is the most difficult question you could have asked me. All my attempts to formulate a concept of colour seem to me to be inadequate; they are just reduced to producing truisms. What I thought was colour in my younger days, as a student and somewhat later, was sooner “colouring”, not colour. That is, it was something concerning the surfaces of the material world. Now, I believe that Plato was right; he said that the laws of harmony and colour are unfathomable and answer only to God.
But I can offer some answers. First of all, colour paradoxically combines essentiality and energy. Second, for me colour is the means of seeing. Third, it exists like a substance, like a material into which I exert my efforts to reach an understanding with the world. The body of a painting is the discourse of mysteries, and the greatest one of all is colour.

J.O.: What does this romantic theory of the concept of “art for art’s sake”
( Schelling) mean today, when art is often no longer an imitation of reality but exists in parallel or independently?

T.S.: Questions are put in some epochs and are answered in others. We are living in an era of questions, and in this way our time is similar to that when Schelling formulated his aesthetics. I wouldn’t go so far as to say that our time is similar to the age of romanticism, but they are definitely close with regard to the desire to expand the active potential of art – outward, pushing boundaries, wanting to exceed oneself.
Certainly, though, the question of blurring boundaries is different for us than it was in the 18th century.
I am rather skeptical about the concept of “art for art’s sake”, or about the idea of the demiurge. Painting has no goal, it doesn’t encode anything – it is worthy in and of itself.

J.O.: A wooden rectangle with canvas stretched on it. The very fact of selecting this frame is an ideological choice. What does this mean to you?

T.S.: In a certain way, it is the continuation of the tradition of classical painting that we emerged from. I think a lot about this and I believe that we need to think about it.

(Perhaps we can carry out some project on this topic)
So far, it has been very difficult for me to refrain from doing so, thought very many people have. I don’t now if I can reject the frame, because for me it remains important, to a certain extent; the wooden and canvas are a connection with parts.

J.O.: Is painting a search for freedom?

T.S.: Yes, and at the same time it is itself freedom.

J.O.: We have liberated color from form, painting from representation, art from its frame. What remains in the search for the essence of painting – defining its internal boundaries?

T.S.: I don’t know if it is possible to objectively determine the internal boundaries of painting, like the external ones. Of course, they are different for everyone. As to the essence of painting, to my mind that means its subject – which is colour/light.
And also, it is a way of talking n the specific language that is the language of painting, its nature. Because not all that is daubed with paint a painting.

J.O.: What is the relationship between current painting practice and idea of progress? What about the language problem?

T.S.: The concept of progress includes the eschatological idea of a “golden age”, but in my opinion, painting exists in another dimension; the essence of aesthetic regard does not change with time. As to the language problem, I would distinguish between two areas development. The first is the expansion of boundaries and renewal of its elements. Painting as a medium is paradigm of expanding the boundaries of art as project. Here we have to deal with ideology. But the boundaries aren’t necessary those of the painting works themselves.
The second way is to the pureness of language, to its sources. I think both ways are productive.

J.O.: How does contemporary art relate to the sacrum?
T.S.: That is one of the most important questions. Essentially, all the problems we face today are connected with the crisis Judeo-Christian culture. And the crisis of the modern man is a crisis of faith. This is the nexus of all eternal questions. And the Sacrum is the cornerstone of religious experience. It seems to me that painting is the last refuge of metaphysics…
J.O.: What is painting?
T.S.: Well, um… given the existential loneliness of man, it is the means by which I can establish harmony with the world.