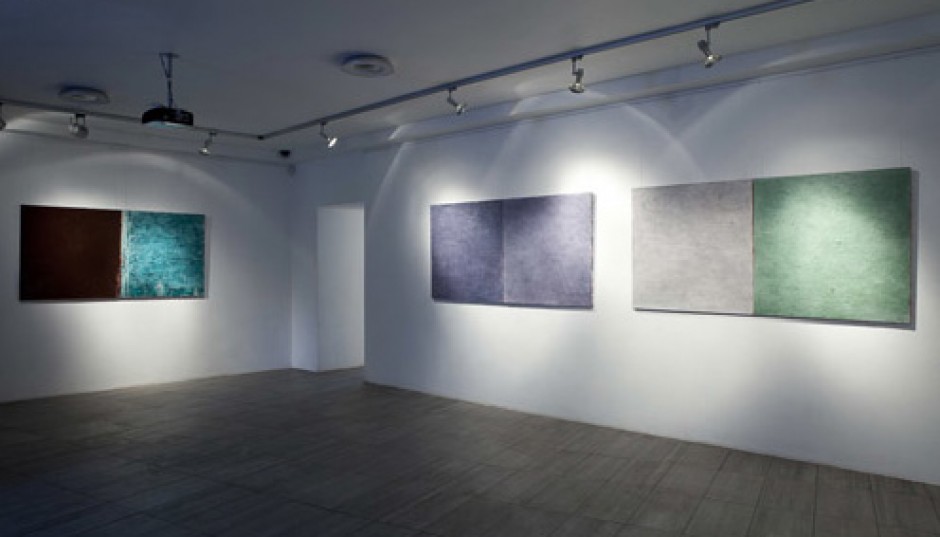 Tiberiy Silvashy: Rhapsody in blue. “What you draw is not important, if it is well done. There are no good paintings about nothing».

Quite a lot is written about the painting of Tiberiy Sil’vashi. Critics underline the combination of saturated emotionality and intellectuality, exceptional color gift and ability “to think in color and by color”, his sense of color as a living mobile substance. That is why his abstract non-figurative canvases captivate us by veracity of experience, artistic “authenticity” of space. Not even space but the environment which has synthesized the energy of author`s move, this tense action of “applying paint on canvas». These paintings fascinate us by the variety of refined combinations of light and color that reflect everyday and artistic reality, by comprehension of painting as an ontological constituent of art which always remains its fundamental basis even while changing its language, expressive means, experiencing crises, doubts and disappointment in one’s own possibilities. However, due to one more merit of Sil’vashi his works never lose their “current artistic importance” in the course of time acquiring wider semantic field. And even more, they attract and surprise and strike us by the magic of color-plastic integrity. This merit is the pronounced “presence of the Author” that turns contemplation into prolonged interview, full of reflections, vivid impressions, unexpected associations…

It should be mentioned that work of Tiberiy Sil’vashi, one of the leading Ukrainian artists of the last decades, had not just been reflecting but also defining features of Ukrainian art since 1970 to the beginning of 2000, resulting to the consolidation of artist’s identity, formation of professional self-consciouness, “return to his true vocation” ( M. Vrubel). His early pictures are close to photorealism, a new phenomenon in Ukrainian art at that time which criticized established dimensions of visual. However, Sil’vashi, a natural artist, felt “cramped” in its limits. He established his own principle of “chronorealism” – an artistic recording of emotionally experienced real time where poly-semantic plot is interlaced with action of colors and freedom of space. His pictures of 1980th – “The Portrait of Picasso”, “The Guest”, “Sudden Awakening”, “Dedication to the Daughter” went down into the history of Ukrainian art. These paintings emphasized the value of artistic subjectivity and rethinking of previous experience. In this sense switching to abstract art was natural. The “fight” between the subject, subject image and painting with its color elements has finished by the victory of the last one. Consequently he became one of the initiators of the “Picturesque Sanctuary” group foundation in 1992. This group emphasized the importance of “mere painting in its specificity”. However, conversion into non-figurative painting that the artist has been working since the beginning of 1990s in, had even wider artistic and professional context caused by the nature of such means of self-expression. In fact, as V. Turchin defines it, “in some sense abstract art is a memory about the origin of art on the whole. Thus, it appears right away when any doubts concerning meanings, values or perspectives of traditional art arise. It lifts non-mimetic elements up to the level of absolute form. The function of abstract art is to be a reminder in the times when many aesthetical illusions are lost that Art is Art. It was especially important in 1980-1990s, the times of big changes in art. As we see, the non-figurative painting had outlined powerful and multi-way tradition long time ago. However, it hasn’t lost its current artistic importance today opposing circulating “designer aestheticism” as well as the variety of “visual images” which fill in the communicative space. T. Silvashi`s position in this sense is indicative and symptomatic: only subtle culture of art, well-considered conceptuality of art work direction, intellectual awareness of the possibilities of artistic language selected and at the same time – the lofty emotional experience of color relate his canvases to the High Art preventing him from crossing that extraordinarily unclear and shaky border which safes him from the danger of “prettiness beauty” and aestheticism.

However, the search of “his way back to himself along the path that’s overgrown” ( V.Van Gog) caused a significant evolution in his artistic views concerning non-figurative painting. These shifts were the result of the necessity to enter his own space in its full diversity that contain the interest to “landscape abstraction» of N. de Stayl, M.Rotko’s symbolic space of color, the emotional expressiveness of Ive Klyane… The analysis of their artistic experience has left a significant mark on T.Silvashi`s works of art, the texture enhancement of surface, the expression of color spots, the transition from the spatially-limited traditional easel painting to infinity, the openness of picturesque surface. Consequently the artist believes that “all the artists of all of times have been creating one Meta-canvas” enriching it with their own discoveries. That is why abstract art exposes special meaning of Painting as “the things in itself” where the variety of internal problems it is solving determines its artistic value. Thus, he creates his own version of “free color painting” that has defined the character of his recent works. His version combines possibilities of all sorts of abstract painting emphasizing traditional moderate “Internal Necessity” (V.Kandinskiy), as a distinctive feature of the abstraction variety, with the vigorous semantics of color. .

Being a real colorist T.Silvashy imparts main “color vector” into his works that directs his picturesque harmonies, determines structure and “reference point” in coloring. This color dominant influences the space of canvas which may not only reach the heart of canvases but also form a special “aura” around them. Let’s recollect that powerful “warm wave” round P. Gogen`s canvases, one of the most fantastic colorists in the history of painting. A sensible observer can feel it even in a dark blue-lilac or green color spectrum. “Hot yellow heat” dominates on these canvases also not by chance… The works of T.Silvashi radiate dark blue. This blue mirage covers the canvases with its aureole filling in the real space. The color determines “white” in his canvas, breaking through the layers of red, dark-garnet or “white” chiming in green, yellow or “black” compositions. You should not look for any symbolism in that as the work of the artist is directed onto visualization of “non-verbal contents” of painting and such experience is irreplaceable as the history proves. It rather characterizes that “musical range” of paints and colors he uses. Being a master of brush, paint, surface of canvas, color and texture, the artist emotionally finds their “place in space” where colors have weight, direction and motion. Thus, they radiate light and breath freely. It is significant that you will not find “naivety of clear natural colors”. His expressiveness is rather of a “cultural” origin that attunes his works with canvases of his predecessors and contemporaries, making artistic associativeness of figuratively-plastic content extremely wide.

On the background of modern art the position of Tiberiya Sil’vashi seems to be classic – to continue and develop The Great Tradition of Painting with its values of skills, quality, author`s self-expression – and, at the same time, his position is current in order to support the on-going discussion about the principles of artistic value, evaluation of creative freedom and trends of Painting that according to the artist has no end.

Galina Sklyarenko
The candidate of the History of art.