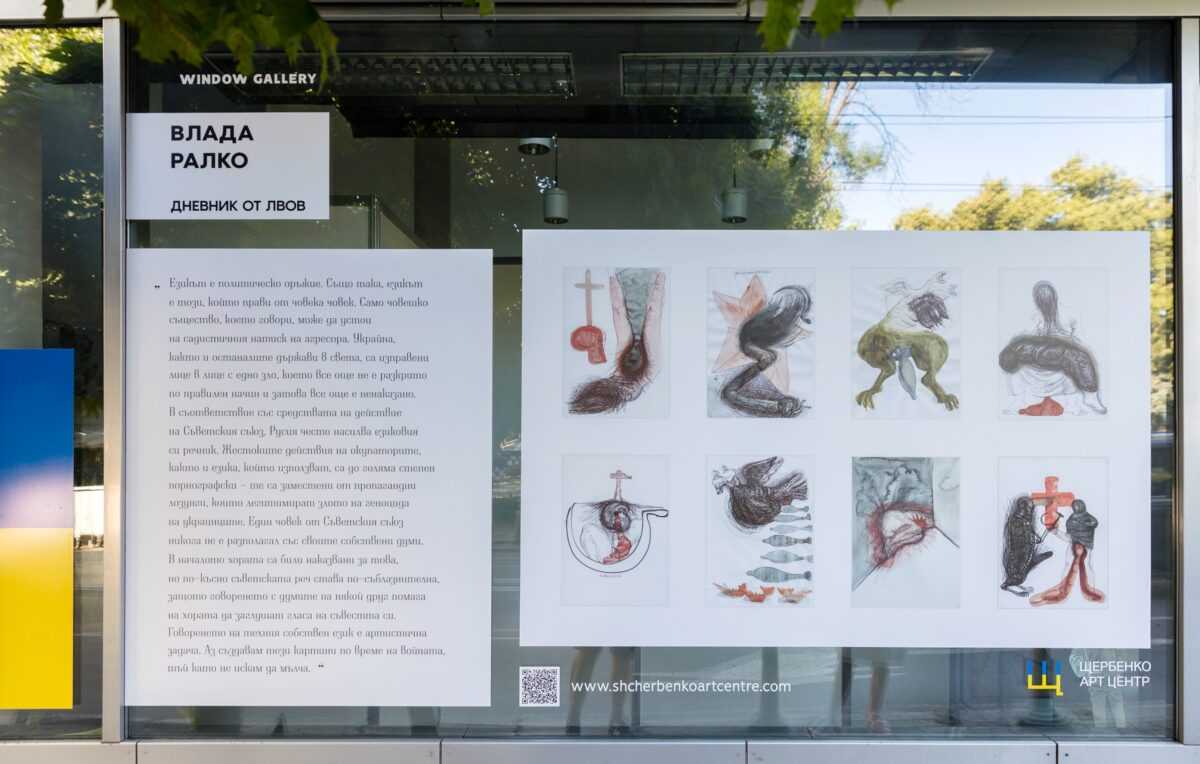 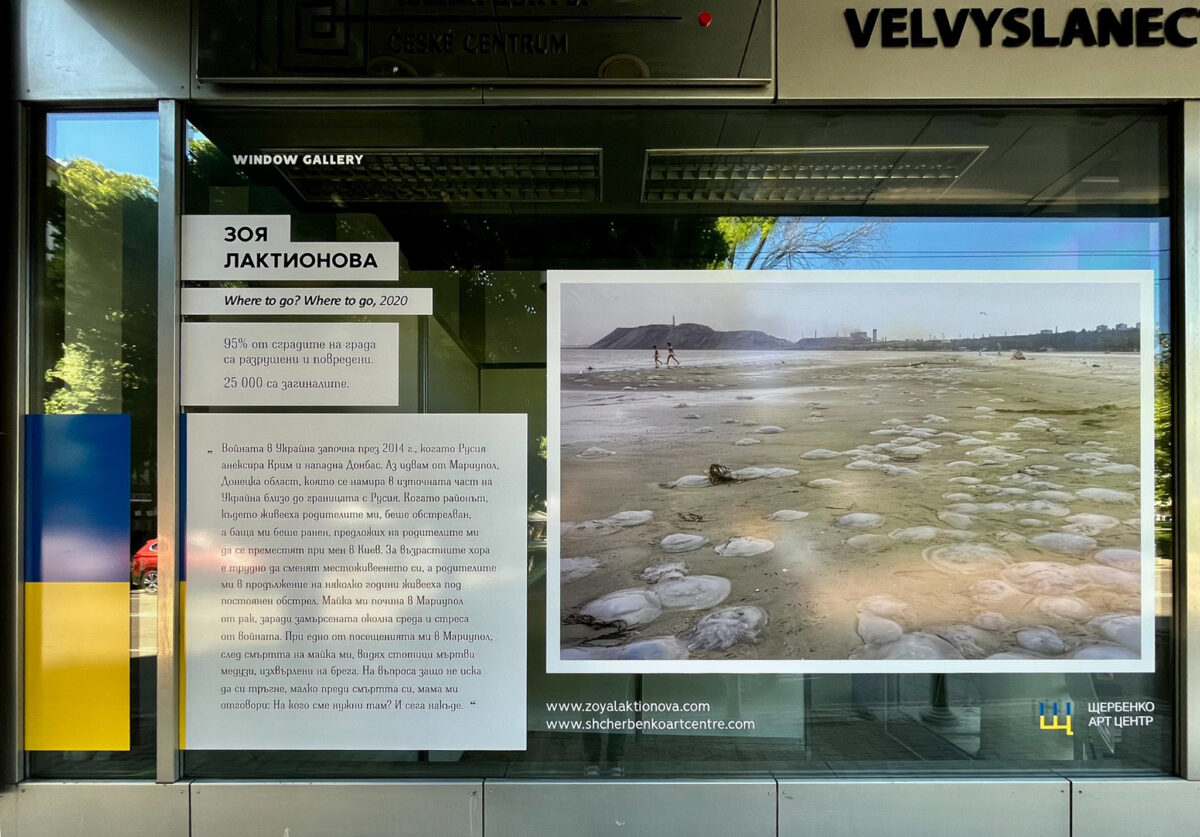 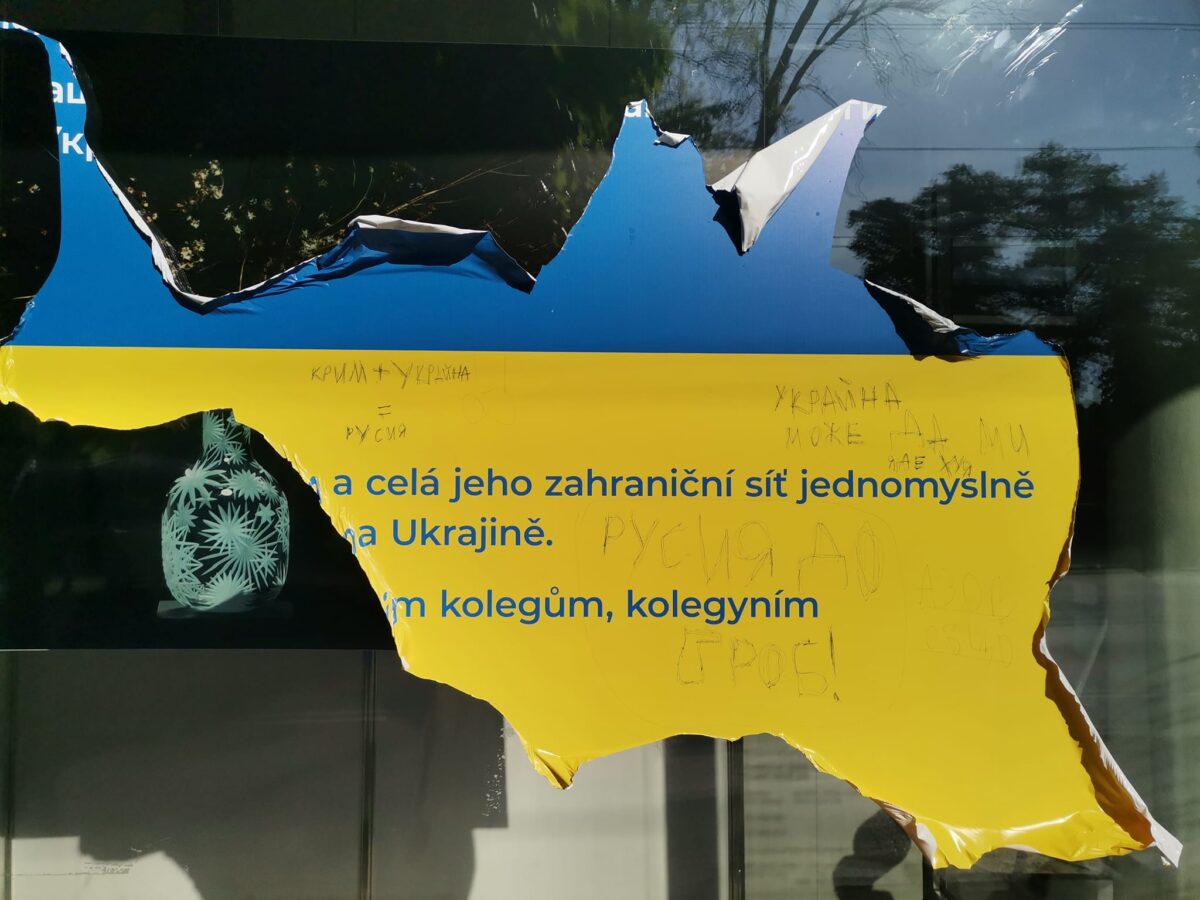 Artists who participated in the project: Zoia Lakrionova, Vlada Ralko

From the beginning of Russia’s full-scale invasion of Ukraine, the Czech Centre Sofia has expressed support for the cultural community and all the people of Ukraine. On May 12, the banner with words of support for the Ukrainian people was ripped down by vandals from the Centre’s window, which was the catalyst for the idea of opening a new ‘Window Gallery’.

The Czech Centre’s team invited Kyiv’s Shcherbenko Art Centre to collaborate on a new project called ‘Window Gallery’. We will place the posters on Centre’s windows, made together by contemporary Ukrainian artists, and the exhibitions will be changed every two weeks. The first Window Gallery project presents the work Where to go? Where to go? by Zoia Laktionova, the artist from Mariupol, finalist of the Young Ukrainian Artist Competition (MUHi) 2021. Mariupol has been occupied by the Russian army for three months now, there is a real humanitarian disaster: the city is cut off from the food supplies, drinking water and medicine. The largest metallurgical factory in Ukraine, ‘Azovstal’, is occupied. The Ukrainian soldiers and civilians are being held captives by the enemy all this time, but they do not give up. Nearly 95% of the city’s buildings have been destroyed and are in ruins. Over 25,000 citizens were killed. The fight for ‘Azovstal’ is still ongoing.

“The salvation of our soldiers who are protecting Mariupol, our defenders and civilians blocked on the territory of ‘Azovstal’ is a matter of concern during the last days of the war. Through art, we want to remind about the catastrophes that are taking place in Ukraine due to the invasion of Russia. Military atrocities must be exposed, and the perpetrators must be punished. The main goal for everyone is to pay maximum attention to the disastrous situation on the territories occupied by the Russian invaders. We are simply lucky that we are not there. The Russian military troops have no limits to the violence, the lives of other people mean nothing to them. We must stop them” — comments curator of the project Maryna Shcherbenko.

The artist’s family moved to the Donetsk region after World War II, particularly to Mariupol, because of the factory. But the war and the vapours from the factory dictate other terms of reality. “The war in Ukraine began in 2014 when Russia annexed Crimea and attacked the Donbas. I come from Mariupol, Donetsk region, which is located in the east of Ukraine near the border with Russia. When the area where my parents lived was shelled by missiles, and my dad was wounded, I suggested that my parents would move to me in Kyiv. However it is difficult for older people to change their place of residence, and for several years parents had lived under constant shelling attacks. My mother died because of cancer caused by the polluted environment in Mariupol and the constant war stress. On one of my visits to Mariupol after my mother’s death, I saw hundreds of dead jellyfish washed away on the coast. When asked why you don’t want to leave, shortly before her death, mom answered: Who needs us there? Where to go?” – Zoia comments.

Within the Window Gallery, Scherbenko Art Centre is going to present projects by such artists as Oleh Dimov, Olha Kuzyura, Alyona Naumenko, Maria Proshkovska, Maryna Taliutto, Vlada Ralko and others.

The Czech Centre in Sofia is the oldest Czech culture institution abroad and is also one of the longest-running foreign cultural organizations in Bulgaria. Its history dates back to 1949, where from the very beginning it is located at the same address – Rakovski 100. The Czech Centres are a contributory organization of the Ministry of Foreign Affairs of the Czech Republic. They are an integral part of Czech foreign policy and a key cultural diplomacy tool. They operate within the public diplomacy domain, whose mission is to promote and support the good reputation of the Czech Republic abroad and to strengthen cultural relations between countries.